Types of Collections on International Advertising

International material can also be found in a variety of Non-JWT collections. These collections include agency records, professional papers, and the records of professional associations and organizations, which pertain to the role of advertising in international markets. See the Non-JWT International Collections tab for a description of relevant material and what you will encounter as you begin researching. 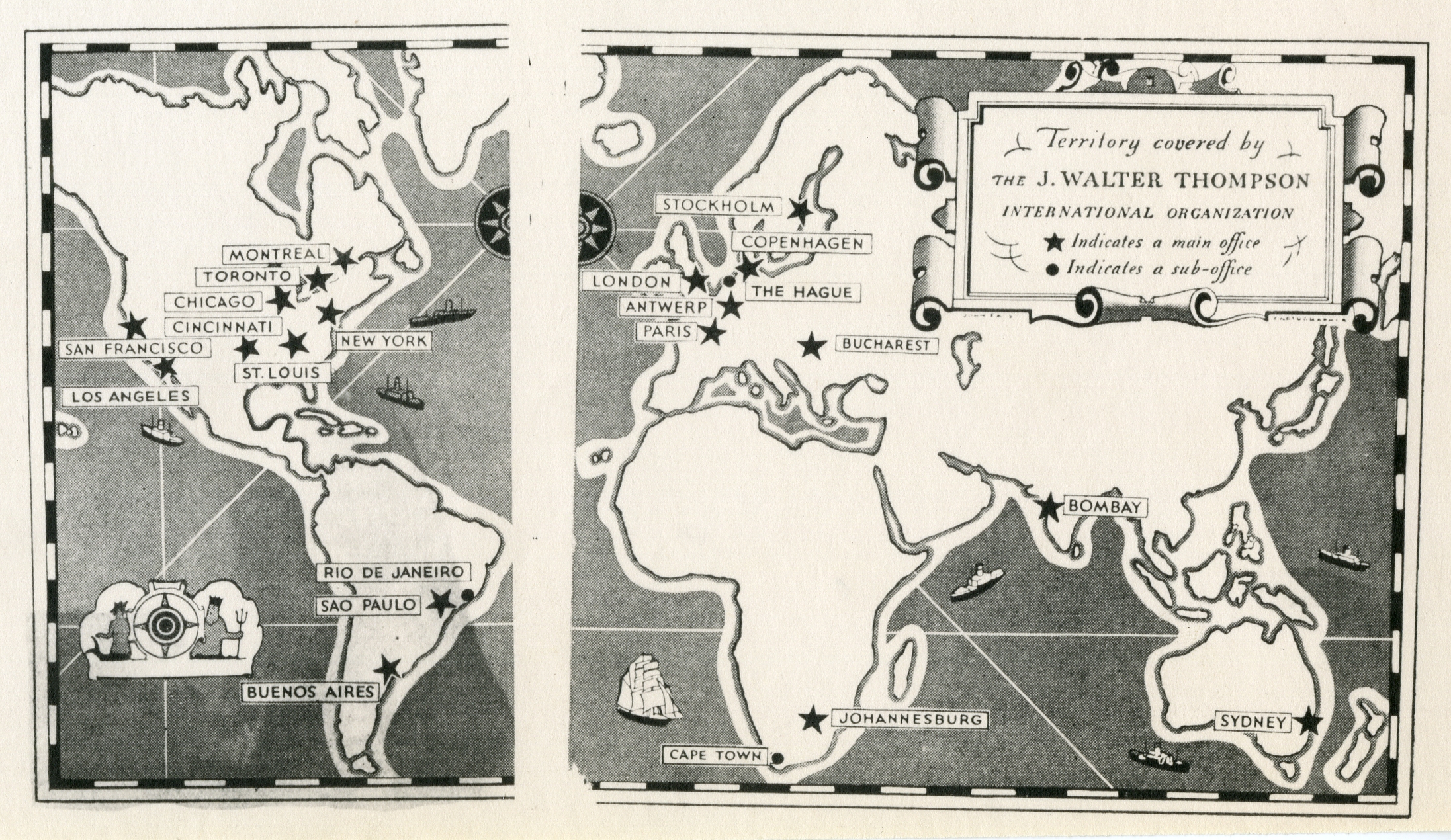 The J. Walter Thompson Company's first international office was opened  in London in 1899. By 1923, it had opened six other European offices; by  1927,  that number had doubled. Between 1927 and 1931, mostly driven by  the agency's relationship with General Motors, the company added  additional offices in South Africa, India, Canada, Australia, Japan, and  South  America. These offices were opened primarily so that  advertisements could be  geared more specifically to cultures of different  regions. JWT has continually  expanded its international activities, and  currently operates out of over 200  offices in nearly 100 countries.

The JWT collections are ripe for research on transnational advertsing in the  20th century. They offer a window into how a large advertising firm  expanded and operated in international markets. They are also a resource for studies of advertsing in specific places outside of the  United States. JWT's activities are heavily documented in some locations with key offices, such as London and Cape Town.  Offices that were short lived or operated on a smaller scale may be less well documented, such as Zambia and Uruguay. Some  places appear in the collections only as potential markets or as the target of specific advertsing campaigns, such as Lebanon and  Vietnam.

These are collections specifically focused on JWT international offices.

These are collections of advertisments JWT produced internationally.

The International Advertisements Collection, ca. 1920s–2000s contains print advertisements JWT produced internationally, for an international market, or for multinational clients. The collection includes series on Africa, Asia/Pacific, Canada, Europe, and Latin America, which are further organized by individual nations. The holdings of the collection are uneven, with the bulk of the advertisements dating from the mid-1960s up to about 1990. There are limited early advertisements from Chesebrough-Pond's, General Motors, and other clients dating from the late 1920s and early 1930s in print and on microfilm from the various offices established during those years. There are almost no international advertisements from roughly 1933 to the middle of the 1950s. The United Kingdom, the British Commonwealth countries, and Latin America account for most of the advertisements from the mid-1950s to the late 1970s. While the holdings since about 1980 are much larger than earlier holdings, they are by no means complete, and vary substantially from office to office. Key multinational clients represented in the collection include Chesebrough-Pond's, Eastman Kodak, Ford, General Motors, Kraft, IBM, Pepsi, R.J. Reynolds, and Unilever.

The Frankfurt Office, Advertisements Collection, 1950-1991 includes newspaper and magazine print advertisements, tear sheets, and proofs. Clients include BASF, Burger King, De Beers, Dunlop, Ford, Kraft, Lever Brothers, Pan Am, and Singer. Most advertisements are in German, although some are in English.

The World War II Advertising Collection, 1940–1948 documents the war-related activities of JWT, including in-house documentation of efforts, advertisements, and work for government, civilian, and war-supporting charitable organizations produced by the War Advertising Council. While many materials are from the United States, the collection also contains war campaigns from the London Office. 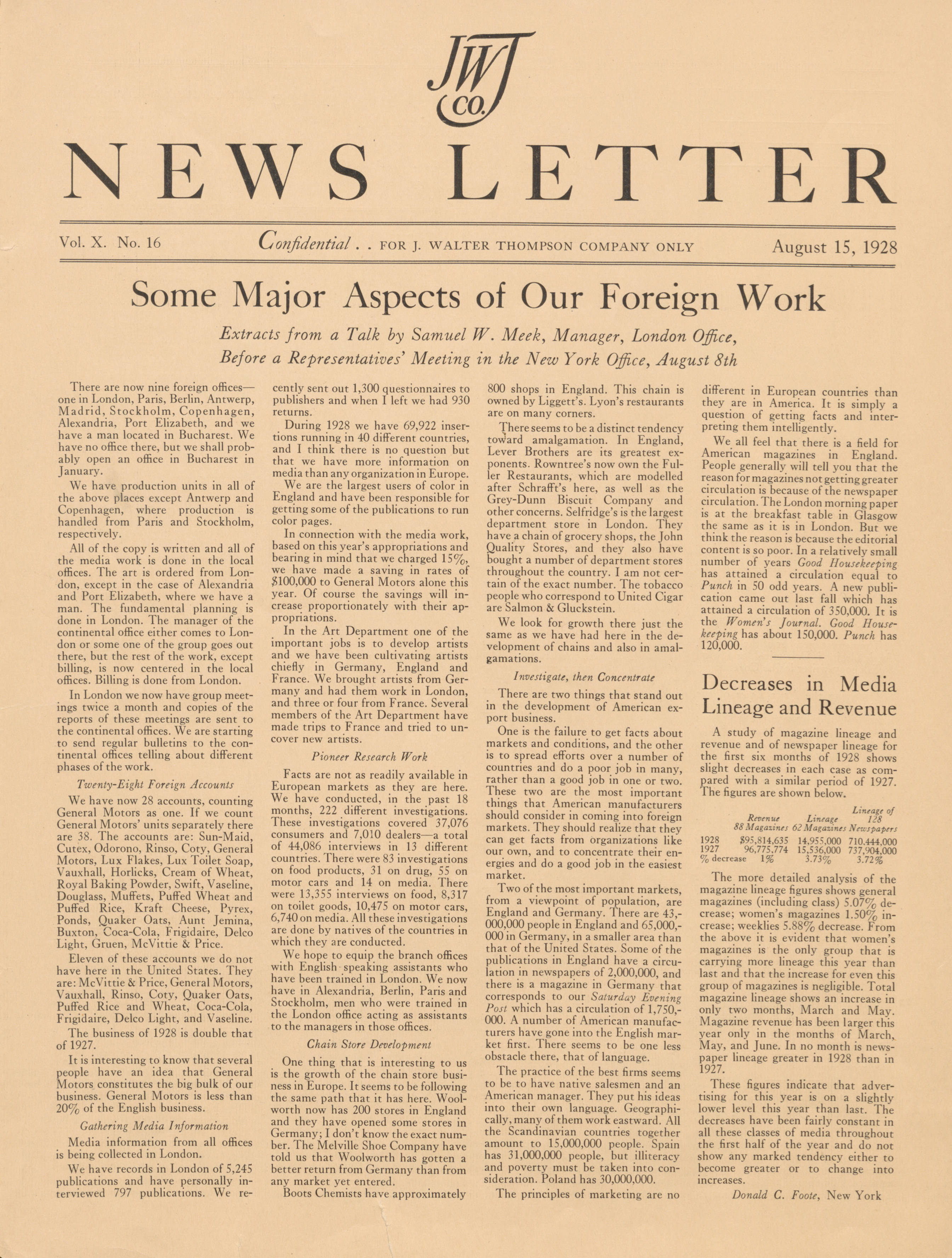 The Newsletter Collection, 1910-2005 comprises the agency's internally produced newsletters. The International Newsletters Series of this collection includes newsletters published by JWT's international offices. Whether or not JWT maintained more than one office in a particular country, usually one newsletter covered the market news of the whole country or major regions as well as the specific news of the offices. The newsletters are usually in the dominant language used by the local office, although some are in English. The collection is organized by region and country. In addition to office-specific newsletters, international office news and agency operations are also discussed extensively in the company-wide newsletter that the agency began publishing in 1916.  These newsletters have been digitized and made available through the library's digital collections site.

The papers of JWT employees are collections culled from one person's activities at the company. Most of these employees were executives and mangers involved in JWT's international operations. A historical note at the bottom of the collection guide will give a chronology of the person's education, professional postions and milestones, and places lived. Often, a collection of a single executive will have correspondence with and files relating to multiple international offices. As a result, you will encounter the same collections on many pages of this guide. For example, the Edward G. Wilson Papers, 1906-1991 appears on twenty eight different pages, for countries in every region.

Vertical Files are collections that contain research JWT conducted and used internally. JWT gathered information about the advertising industry, companies, places, and subjects relevant to the agency. They are typically organized by subject matter and often include materials like news clippings from trade press, reports, and memorandum.

The Advertising Vertical File, 1950–1994 consists of files on a wide range of advertising topics, comprised of news clippings, articles, and pamphlets. The files were maintained in the New York City office, but includes research on international agencies, travel, and laws and regulations, as well as advertising in non-U.S. regions and countries.

The Corporation Vertical Files, 1915–1999 are alphabetical files of miscellaneous information on U.S. corporations, some domestic and some multinational, including major JWT clients and competitors of those clients (such as AT&T, McDonald's, and General Motors).

The Marketing Vertical File, 1946–1999 consists of subject files on a wide range of marketing topics used by JWT staff, including research on international marketing.

The Publications Collection contains promotional pamphlets, regional market analyses, research reports and other assorted agency publications.  A bulk of the international publications were produced by the agency's offices in the United Kingdom but there are also a number present from offices in Europe, Asia, and Central and South America.  The domestic publications series documents JWT's expansion into global markets in the 1920s and includes publications on local markets, economies, and consumer behavior.