In this category, scrapbooks refer to decorative albums composed of "scraps," collectible cards, and trade cards, which were sometimes arranged quite artistically on a page. It was fashionable for young women to include bright colored advertisement cards when creating these scrapbooks in the late 19th century. Advertisement and business cards are included in the four selected books. The images under each scrapbook are listed as they appear in the scrapbook itself. 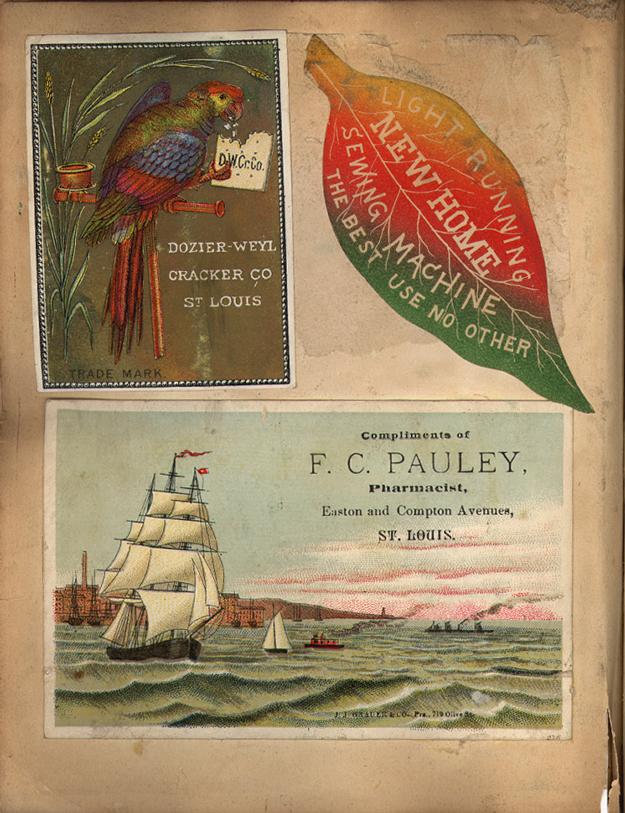 The Oxford English Dictionary defines a scrapbook as "A blank book in which pictures, newspaper cuttings, and the like are pasted for preservation." The dictionary gives the earliest known example of the word used in print dating from 1854.

Creating scrapbooks became a popular pastime, especially for women and children. Scrapbooks were used as a way of teaching children to organize and classify information and to develop an artistic sense. Based on surviving examples of scrapbooks, it can be seen that people put them together sometimes as a craft project, and sometimes, to preserve letters, photos, and other aspects of their personal or family history. Nineteenth century scrapbooks vary about as widely as 20th century ones, though perhaps they contain more advertising items, given the prevalence, novelty, and popularity of trade cards at the time.

Printed items that 19th century scrapbook creators tended to paste into albums included many of the following, which are found in the scrapbooks in this project:

Most 19th century scrapbooks were discarded long ago. Those that survive often are fragile because of the acidic paper on which their contents are mounted; that paper disintegrates very easily and messily. Sometimes glue has damaged or discolored the items in the book. Old scrapbooks that do survive sometimes remain in private hands. Many others have found their way to libraries and museums, where they are available to researchers and students and offer glimpses of the history of typography and printing, advertising, art, and design, as well as of lifestyles and cultural trends.

The pages shown on this site represent the complete contents of four scrapbooks from the collections of the Duke University David M. Rubenstein Rare Book & Manuscript Library: