Print advertisements for medicinal products, beauty products and shaving products manufactured by the Pond's Extract Co., now part of Chesebrough-Pond's, make up this category. A few of the ads also include the Polly Peter Ponds. The advertisements are organized by date. 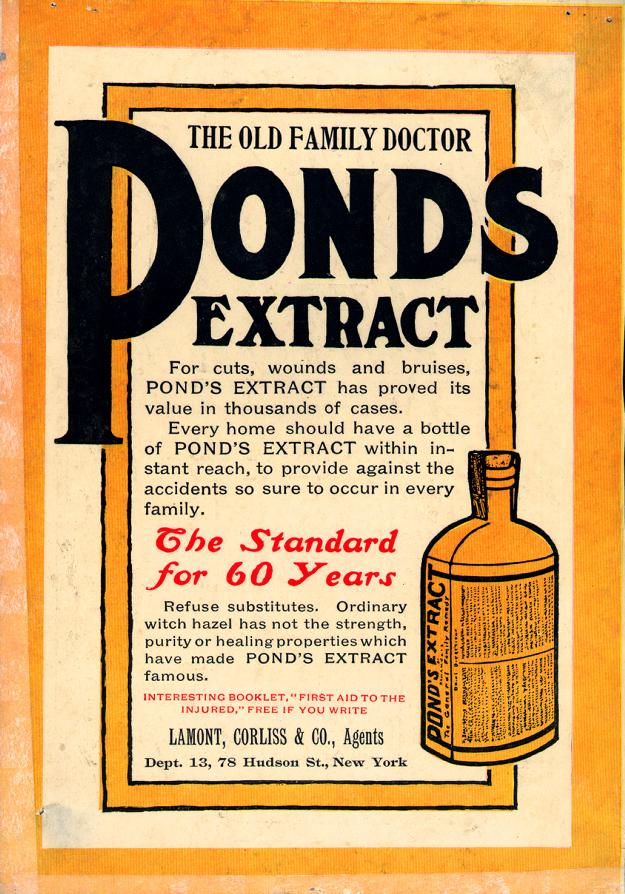 In 1846 chemist Theron T. Pond extracted a healing "tea" from the bark of witch hazel for use as a topical salve for wounds and purported remedy for numerous other ailments. Pond was among the first to create a commercial product from witch hazel; it became known as Pond's Extract. In 1849 Pond and several partners formed the T. T. Pond Company. Mr. Pond soon sold out and died in 1852. The company moved its manufacturing facilities to Connecticut, then moved its sales offices to New York City. The company incorporated in 1914 with the name Pond's Extract Company.

Pond's began its first national advertising campaign in 1886, using the services of the well-established J. Walter Thompson Company. Even though the Pond's company began creating other products based on the Extract in the 1890s, it advertised only Pond's Extract until 1910. Around that time, owing the broader availability of witch hazel at a lower price, it became clear that Pond's Extract had no future.

Among the products the company developed early in the new century were Pond's Vanishing Cream and Pond's Cold Cream.J. Walter Thompson Company began creating ads focusing on the glycerine-based Vanishing Cream in 1910. In the early ads, Pond's Extract and Cold Cream were often mentioned briefly at the bottom of the copy. In 1914, advertising for Pond's Extract ceased, and a new campaign was initiated, promoting the Vanishing Cream and Cold Cream together in ads with the theme "Every normal skin needs these two creams." The new ads drew a clear distinction between the intended functions of the two products: Cold Cream to cleanse, Vanishing Cream to protect the skin. According to a JWT report, "the success of this strategy was immediate," with the 1916 sales showing a 27% increase for the Cold Cream and 60% for the Vanishing Cream. The campaign theme remained consistent for eight years, after which sales gains began to slow, though both creams still were leaders among the numerous brands marketed in the same product categories. 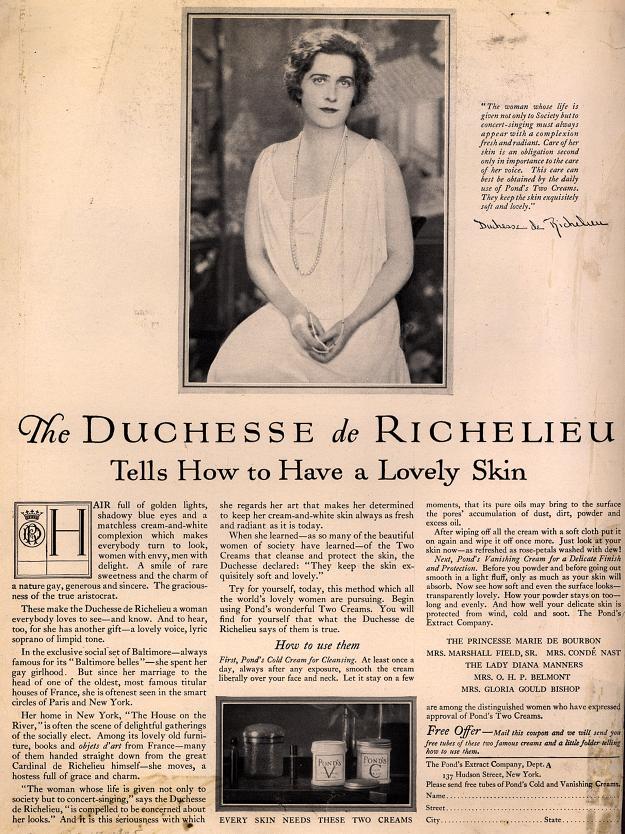 Concerned about the sales drop and changes in the competitive environment, JWT undertook intensive market research. The advertising agency reached the conclusion that the two Pond's products "had begun to suffer from their very leadership. Reasonable in price, used by everyone, many women had begun to think that they could not be as good as creams that were more costly or that were imported. Their enormous popularity had brought them loss of caste; they lacked exclusiveness, social prestige." (JWT Account History, January 18, 1926).   JWT launched a bold strategy to give the creams prestige: a testimonial campaign which included the endorsements of "three of the reigning queens of Europe, six princesses, titled ladies, and leaders of American society," beginning in 1924. The campaign was carefully planned, and the ads were placed in a selection of the largest circulation women's magazines, in a half dozen fiction and motion picture magazines, and in only one "class" publication, Vogue. Sales of the creams jumped again, and they maintained their leading positions in a crowded marketplace of similar products.

In addition to testimonials (first used by Pond's in 1914, employing actresses' testimonials for Vanishing Cream), other marketing techniques that JWT employed in Pond's ads up to 1925 included coupons and samples, and serialized stories (tales of Peter and Polly Ponds in the 1910s).

Growth of the Pond's Extract Company continued into the 1940s. New products included Face Powder and Angel Face. In 1955 the company merged with Chesebrough Manufacturing Company, creators of Vaseline Petroleum Jelly. The joined company diversified further with Cutex nail polishes, Prince Matchabelli perfumes, and other products. In 1987 the British- and Dutch-owned Unilever purchased Chesebrough-Pond's, which is now a division of that consumer product giant.

The Pond's advertisements included in this web project (for Pond's Extract, Vanishing Cream, and Cold Cream) wereselected from the J. Walter Thompson Company Archives, Domestic Advertisements Collection (Chesebrough-Pond's Files). Not all of the surviving ads from the 1882-1925 period have been included here; rather, examples have been selected to show the range and types of advertising for these products.