Ellis Collection of Kodakiana in EAA

The advertisements included in EAA include some of the earliest Kodak print ads. The first year for the Kodak camera was 1888. George Eastman's Kodak camera represented a major breakthrough, as photography in the late 19th century was a cumbersome and complicated process requiring glass plates, chemicals, and bulky equipment. The advertisements are organized by date.

About the Ellis Collection of Kodakiana 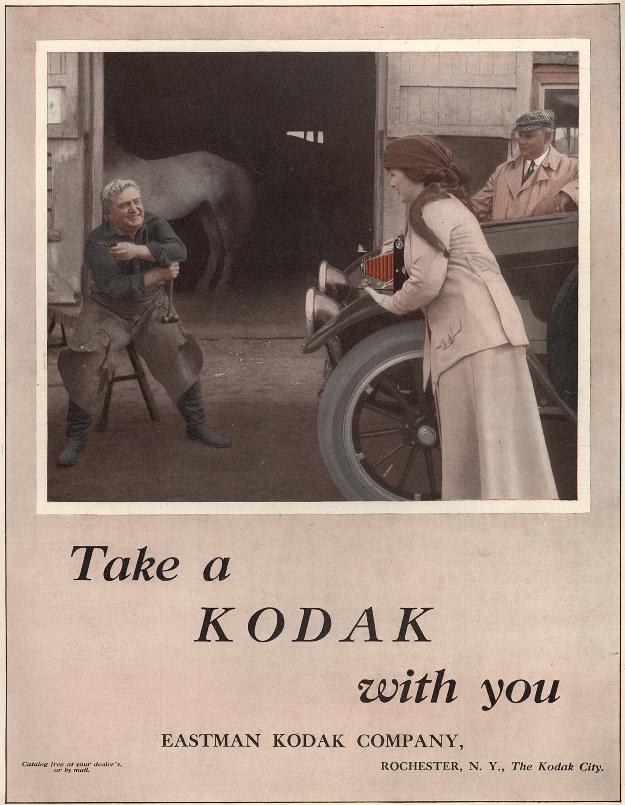 Young bank clerk George Eastman founded a company in 1880 to manufacture photographic dry plates in Rochester, New York. He obtained financing and engaged in research with a goal of simplifying photography. His breakthrough, in 1883, was the creation of film in roll form, for the first time allowing multiple exposures with a single loading. In 1888 he created a small plain black box camera that had a pushbutton to take pictures and a key to advance the film. Sold pre-loaded with a roll of 100 shots, this was the first Kodak camera. There was no way to focus and no viewfinder; the user held the box and aimed it at the desired subject. After using all 100 exposures, the photographer sent the whole camera to the Eastman Company in Rochester for developing, printing, and reloading at a cost of $10. The product's first advertising slogan, "You press the button - we do the rest," reflected this process.

The name "Kodak" had no meaning; Eastman created the brand name for reasons he summarized in his British patent application: "First. It is short. Second. It is not capable of mispronunciation. Third. It does not resemble anything in the art and cannot be associated with anything in the art except the Kodak." In 1892 he renamed his firm the Eastman Kodak Company. Kodak cameras were not cheap at $25 apiece - about the equivalent of $400 today - so at first few Americans could purchase them. Yet the novel product, supported by extensive and appealing advertising, grew in popularity especially from the 1890s onward.

Eastman was devoted to mass production of his cameras, international distribution, and meeting customer needs. His success was dramatic: by 1896, the 100,000th Kodak camera was made. Throughout the 1890s, Eastman worked to improve his product and reduce the price. By 1896 there was the Bull's Eye model ($12) and in 1900 the first breakthrough Brownie camera that cost just $1, finally making photography truly accessible to the amateur masses.

Advertising was a major budget item for the company and a cornerstone of George Eastman's business success, making Kodak a household word while many competing brands failed to gain a permanent market share. Eastman created an advertising department and hired a manager in 1892. A well-known icon, the Kodak Girl, began to appear in magazine and poster advertising in 1893. By the end of the century, the company was spending a phenomenal $750,000 annually on promotion. A famous slogan first used in 1905 proclaimed, "If it isn't an Eastman, it isn't a Kodak;" in that same year the eminently recognizable yellow box appeared as film packaging. In some advertisements and other texts the word "Kodak" was used as a verb ("Kodak as you go," was one advertising headline) but this usage did not a become permanent fixture in the English language. 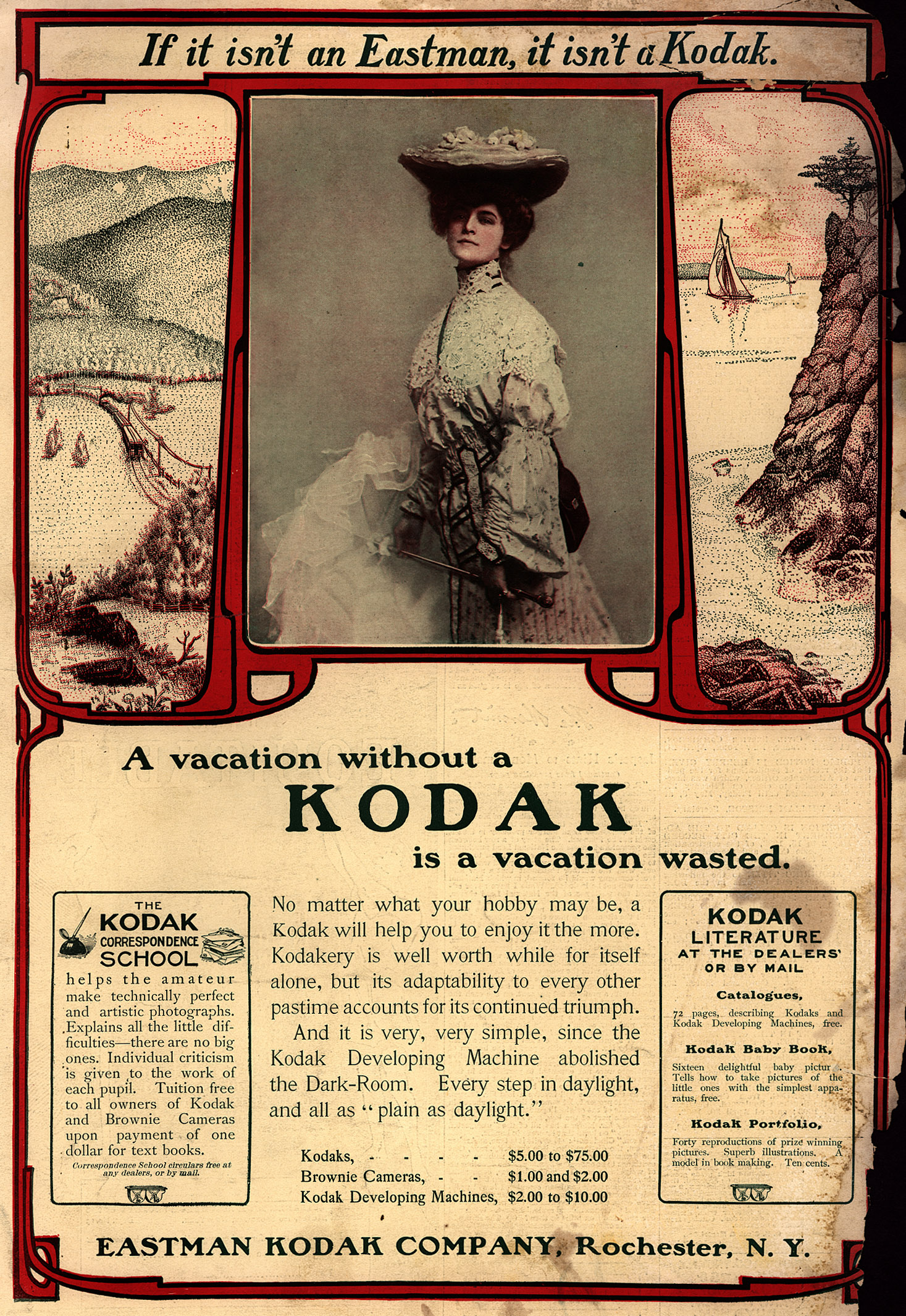 The company carefully positioned its magazine advertising, placing it in quality titles with high circulation. Interestingly, for a company marketing photography, in its early yearsEastman Kodak commissioned noted artists to illustrate many of its magazine ads, especially from 1900 to about 1915. It should be noted that photography was rare in ads for most products until the 1920s, but Kodak began to use it intensively after 1915. Snapshot-like photos of families, holidays, get-togethers, and travel became mainstay illustrations in Kodak advertising. Several writers have noted that this advertising virtually taught America how to become photographers: "Once people owned cameras, they need to be told what their pictures ought to look like," wrote William F. O'Barr. "This type of instruction became the predominant subject matter of camera advertisements during the first half of the twentieth century...." Other highly successful means of promoting Kodak products included contests and promotional literature. Eastman Kodak produced an array of booklets with titles like "How to Make Good Pictures," some targeted at general consumers and others to professional photographers or camera salesmen.

The early Kodak advertisements featured here provide a wonderful glimpse of the introduction of a new technology to the American people and the whole new way it allowed them to capture their life experiences to share and cherish.

The advertisements used in this project come from The Wayne P. Ellis Collection of Kodakiana in the Hartman Center. Mr. Ellis, who died in 1994, was a Pennsylvania engineer and avocational collector. Unlike many collectors of photographic memorabilia, Ellis concentrated on advertising and marketing items. He acquired virtually every Eastman Kodak ad that appeared in general interest magazines up to the 1980s. He also assembled long runs of Kodak publications for consumers, camera dealers, and professional photographers. His collection also includes unique documents about the company, a small number of early Kodak snapshots, and various promotional items.

The Ellis Collection is an outstanding resource for studying photography and photographic marketing. For the period from 1930 - 1997, documents and advertisements relating to the Eastman Kodak account in the J. Walter Thompson Company Archives are an excellent complement to the Ellis Collection.