The J. Walter Thompson Company, one of the largest and most enduring advertising agencies in the world. Founded in 1864 in New York, it was by the late 19th century already one of the most innovative companies; a leader in moving toward providing "full service" advertising and marketing for its clients. The "house ads" in this category illustrate how the JWT Company promoted its name and its work at a time when contracting with an outside advertising agency was not assumed to be a routine part of doing business. The advertisements are organized by date.

William James Carlton in New York wrote in his diary on December 5, 1864, "Commenced to canvas for advertisements this morning for several papers." By this he meant he was buying newspaper space to sell to businesses to place their ads. In the-mid 19th century, the organized advertising industry was in its infancy, and agencies performed mainly a space-brokering role. This new agency was called Carlton & Smith, though little is known of the Smith partner. In 1868, Carlton hired a young James Walter Thompson (1847-1928), a Marine Corps veteran from Massachusetts. Thompson became a very effective salesman for the small company. In 1878, Thompson bought the agency for $500 and renamed it J. Walter Thompson Company.

Soon he had set about making changes in the conduct of advertising: offering "full service" to clients, including the creation of ads as well as placing them in publications, and persuading the quality magazines of the day to include advertisements. Before long, Thompson was the exclusive agent for 30 noted periodicals, including Scribner's, Godey's Lady's Book, and The Century Illustrated. As a result of these achievements, Thompson is considered the father of magazine advertising in the U.S.

Thompson opened offices in Chicago, Boston, Cincinnati, and London, the last of these making it one of the earliest U.S. agencies to do business abroad. He hired the people who became his successors and who later built JWT to industry dominance by the mid 20th century.

In the 1880s Thompson began promoting his burgeoning agency in several ways. He created giveaway items such inkpots and pin boxes emblazoned with his company name; a few of these have survived. He began to publish books that set forth his advertising philosophy, showed examples of his agency's work, and provided newspaper or magazine circulation and rate information to prospective advertisers. These books, with titles like "The J. Walter Thompson Blue Book," were handsomely printed from about 1887 to 1912. 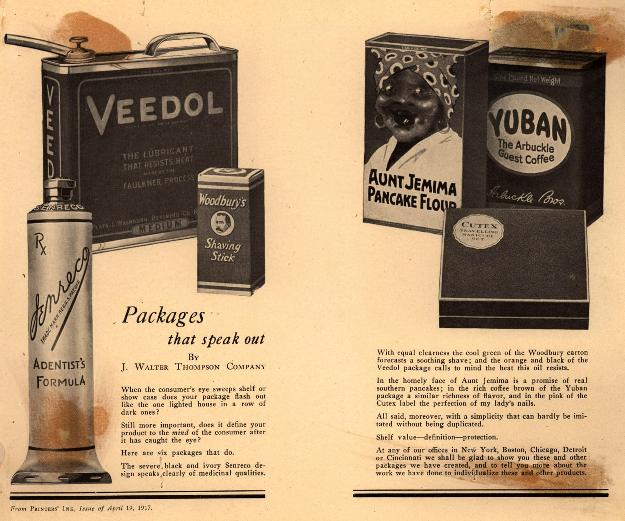 Also in the 1880s, Mr. Thompson initiated another promotional method: creating advertisements for the agency itself, known as "house advertisements." These house ads typically were created by the agency itself as another means of publicizing JWT to companies seeking professional advertising services. The ads began appearing in both trade and some general magazines in the 1880s and increased in volume and variety with every decade through much of the 20th century. JWT certainly was not the only agency to use this method; its ads in some decades, though, such as the 1920s, are particularly illuminating about its methods of doing business, and its specific accomplishments for various clients.

In 1916, having built a highly successful and renowned business over a period of 38 years, an aging Mr. Thompson sold out to a group of company officers, including his successor Stanley Resor. Resor quickly took the reins and consolidated the sprawling client list from hundreds to a more manageable number of accounts, keeping the most profitable ones. He built the J. Walter Thompson Company into the largest and most dominant agency in the industry by careful hiring, international expansion, and acquisition of quality accounts, a number of which - such as Ford and Kraft - still are major clients of J. Walter Thompson Company today. Resor remained President of the agency until he retired in 1955. The agency has had five leaders since that time and can take pride in numerous innovations and achievements in advertising and marketing. In 1987 a British company, WPP Group plc, purchased JWT, which today remains a prominent global advertising agency.

The house ads in this web project are taken from a section of the J. Walter Thompson Company Archives, the Domestic Print Advertisements Collection. The ads are preserved in chronological order up to the 1990s, when the agency's use of house advertising diminished or ceased. Covering a period of over 100 years, this collection usefully illustrates one agency'schoice of themes with which to promote itself to American and some international businesses.

Fox, Stephen. The Mirror Makers: A History of American Advertising and Its Creators. New York: Morrow, 1984.