Lux Flakes, a laundry product, was advertised with attractive artwork and included text instructing homemakers on the care of mass produced clothing. Silks, woolens, and baby clothes, among others, are highlighted in these ads as being safe to wash with Lux Flakes. The advertisements are organized by date. 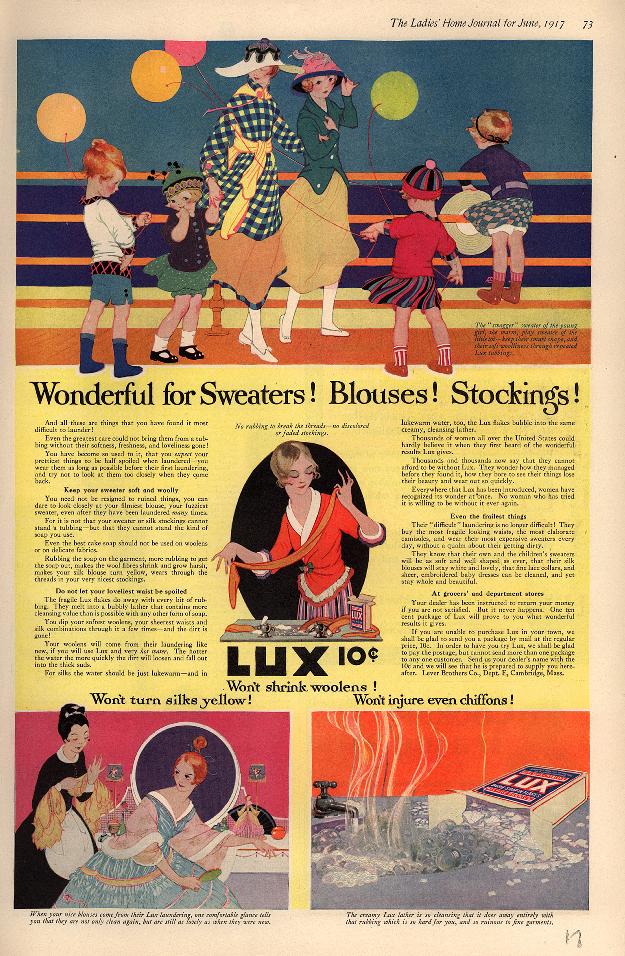 Up to the end of the 19th century, washing clothes at home usually entailed the tedious task of cutting chips off of large hunks of laundry soap to use in creating sudsy water. A Monsieur Charpy employed at Lever in England developed a technology that allowed production of a very thin sheet of soap that then could be flaked. The company began selling what they first named "Sunlight Flakes" in England in 1899, though the name was changed to "Lux" in 1900. As a trade name, Lux had multiple advantages. The name is short and easy to remember; in Latin it means "light" (and so is related to Sunlight); and by association it suggests luxury. The Lux trade-mark was registered in the U.S. in 1900. The soap flakes began to be imported to the U.S. in 1906 and manufactured at a new Lever Brothers plant in Cambridge, Massachusetts in 1907. The product was not promoted heavily at first, and sales were modest.

Several events changed Lux into a major product for the home laundry: (1) more American women began to wear silks and other fine fabrics; (2) Francis Countway, a firm believer in advertising, became general manager of Lever Brothers in the U.S. in 1912; (3) Lever expanded its American factory capacity in 1915; and (4) the J. Walter Thompson Company, which handled advertising for other Lever brands, suggested a new market positioning for Lux. Up to 1915, the main promotional theme of the product (reflecting its roots in England, where wool was widely worn) was "Lux Won't Shrink Woolens." JWT suggested positioning Lux as a new laundry product that could be used safely to wash all fine fabrics. Mr. Countway approved the idea, and a newspaper advertising campaign began, first in New York and Chicago papers for "this wonderful new product." The success of the campaign can be judged by the jump in sales from 10,000 cases in 1915 to over 1 million cases in 1918.

The early campaign aimed to educate users of the new washing product. The advertising later appeared in magazines such as Ladies Home Journal, with attractive color illustrations. The Lux product was called in some advertising tag lines "the pure essence of soap in flakes," - in part to distinguish it from harsher washing powders - but the distinctive package in those early days never called the product soap or flakes, just Lux. The ads gave consumers directions for using the flakes. In 1922, some ads promoted use of Lux for washing dishes [note: the collection of early Lux ads in the JWT Archives at Duke lacks ads from 1921-1924, so there are no dishwashing ads represented in this web project]. In 1924 a contest invited women to submit testimonial letters. Of the 53,000 entries, many had to do with uses of Lux by well-known people. Some of these testimonials were used in anew variation of Lux advertising [see 1925 examples in this project].

According to the "History of Lux Toilet Soap," letters submitted in the 1924 contest showed that "women had already extended [use of Lux] to the general realm of toilet soap….they were using it in the flake form for their hands, bath, babies and shampoo." This information encouraged the Lever Brothers Company to create a soap bar, initially named "Lux Toilet Form," but soon re-christened "Lux Toilet Soap," that became a well-known and much-advertised hand soap for the following three decades.

The Lux advertisements in this web project have been selected from the J. Walter Thompson Company Archives, Domestic Advertisements Collection (Lever Brothers files). The JWT Archives also contains a considerable amount of documentation of the agency's work on Lux and other Lever Brothers brands.