This category consists of black and white photographs of billboards and signs created by the R. C. Maxwell Company, the oldest existing outdoor advertising company in America. There are a number of images of the Atlantic City, New Jersey Boardwalk as well as Asbury Park, New York City, and Philadelphia. The images in this category are organized by date and place.

About the R.C. Maxwell Company Collection 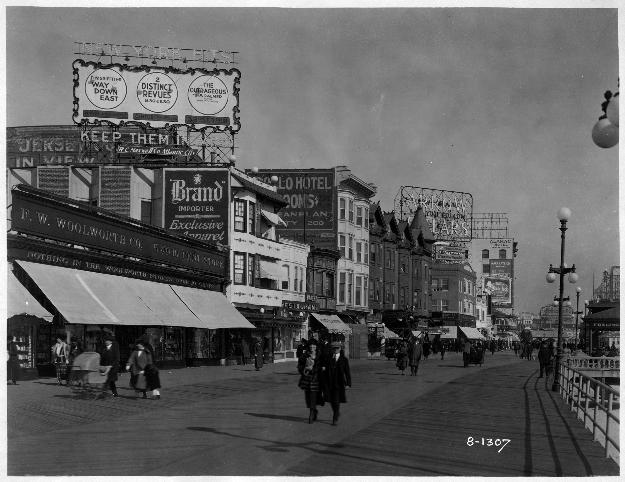 The outdoor advertising industry in the U.S. began to assume its modern form in the middle of the19th century, when billposters pasted small posters on almost any available wall or flat space. Technological improvements in printing made it possible to print larger sheets that could be mounted in several pieces to create much larger posters. Circuses and theaters were early users of this form of advertising, which often was posted willy-nilly on fences and buildings. Wooden "billboards" (i.e. boards for the posting of "bills") began to be erected along railroad lines, bringing advertising messages to train passengers. By the 1870s, developments in color lithography meant that ever-greater numbers of posters were printed in eye-catching color.

Bill posting companies began forming at mid century, including John Donnelley in Boston (1850), Thomas Cusack Company in Chicago (1875), and O. J. Gude in Brooklyn (1878). The industry as a whole made its first organizing efforts in 1872; subsequent organizations eventually became the Outdoor Advertising Association of America(OAAA), which still is the main industry association today.

The long quest to standardize structures on which to mount posters was first resolved in 1900, with the design of a structure that could hold varying numbers of poster sheets each 42" x 28" in size. Standardization was an important step toward the billboard's acceptance as a responsible advertising medium, though anti-billboard movements have existed almost as long as the industry itself.

National needs of World War I provided opportunities for experimentation by outdoor advertisers as well as for pro bono contributions to the war effort. Following the war, the industry flourished. Advertising was maturing as a profession, and most importantly, more and more Americans began to own cars. As author James Fraser has written, "The automobile was the essential element for billboard expansion." More and better roads also created greater opportunities to reach the traveling public with messages about goods, services, the public welfare, and entertainment.

R.C. Maxwell Company of Trenton, New Jersey, was one of the earliest enduring outdoor advertising companies. It was founded in 1894 by Robert Chester Maxwell (1873-1954), a 21-year-old sign painter. In 1923 the company merged with Trenton Poster Advertising Company and moved to the building at 725 E. State Street, where R.C. Maxwell remained until the sale of the company to Interstate Outdoor in early 2000. Maxwell's business followed burgeoning industry trends. With the commercial development of the incandescent bulb after World War I, the company began creating electric advertising signs in 1919. Maxwell saw great potential in these "spectacular" signs and established the Electric Sign Manufacturing Plant in Atlantic City, New Jersey in the 1920s. This subsidiary created such giant ads as a 50-foot Colgate thermometer that was placed atop a building on the Atlantic City Boardwalk in 1922.

R.C. Maxwell owned numerous billboards in Atlantic City, where they were visible to the crowds of strolling passersby. The firm created a well-known ad for Chesterfield Cigarettes that was put up in 1926 on Tilyou's Steeplechase Pier. The huge sign, visible from the Boardwalk and miles of beachfront, used 26,000 bulbs originally; the new slogan "Taste Above Everything," added later, used an additional 1,000 bulbs. The sign used 465,000 watts of electricity and required extensive machinery to run. 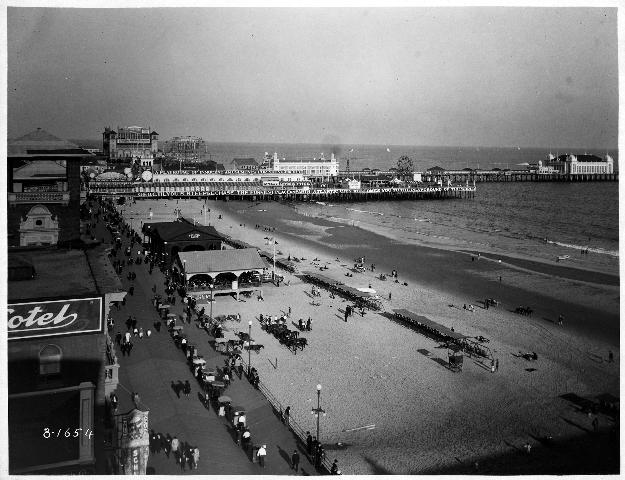 The R. C. Maxwell Company Archives at Duke contains over 35,000 photographs of signs, billboards, and prospective billboard locations from as early as 1917 to the 1990s. The high-quality images are important not only for their advertising content, but also because many of them show urban or rural landscapes with buildings, automobiles, and pedestrians in the company's primary markets in New Jersey, New York, and southeastern Pennsylvania. Nearly all the photos are carefully marked with the date and precise location.

The earliest items that are part of this web project are from the David L. Clark Scrapbook. Clark was an artist who worked in the southeastern U.S. in the early part of the 20th century. He raised his orphaned nephew Robert Chester Maxwell. As a teenager Maxwell ran away from the Clark home in High Point, North Carolina and headed north to Trenton, New Jersey, where he founded the R.C. Maxwell Company as soon as he was of legal age. The Clark scrapbook contains small snapshots of painted wall signs in North and South Carolina and other southern venues.

The R.C. Maxwell Company photographs in this web project begin in 1917. The earliest ones were created from glass negatives, from which 8" x 10" prints were made. Duke University houses not only the prints and negatives (both glass and film), but also the view camera used to take many of the photographs.

The R.C. Maxwell Company. 1994 Calendar, prepared for the company's centennial.