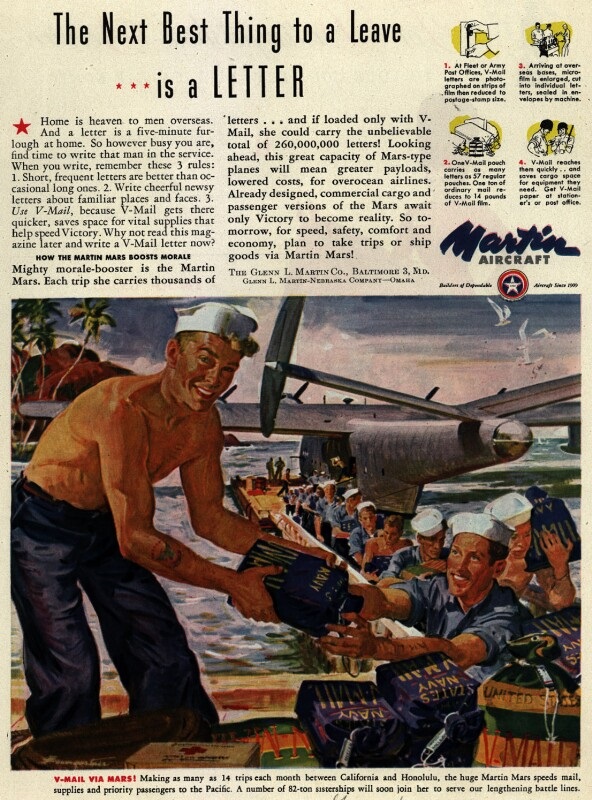 During the latter years of WWII, V-Mail became a popular way to correspond with loved ones serving overseas.  V-Mail letters were written on forms that could be purchased at five and ten cent stores or the post office.  These special forms were photographed, put on film, flown across the world, and then reproduced at the mail center closest to he recipients position.  The development of the V-Mail system reduced the time it took a soldier to receive a letter by a month - from six weeks by boat to twelve days or less by air.  However, the main advantage of V-Mail was its compact nature.  Reduction in the size and weight of letters translated into more space for crucial supplies on cargo planes; one advertisement explained that 1,700 V-Mail letters could fit in a cigarette packet, while reducing the weight of the letters in paper form by 98%.  Transport of the letters by plane reduced the chances that the enemy would intercept the letters, although writers were reminded to delete any information that might prove useful to the enemy in case some V-Mail was captured.

Americans on the home front were encouraged by the government and private businesses to use V-Mail.  Letters from home were considered a "five-minute furlough," and advertisements tha instructed how, when and what to write in a V-Mail reached a peak in 1944.  Letters were to be cheerful, short and frequent.  V-Mail made it possible for servicemen halfway across the world to hear news from home on a weekly basis.