The rental car industry had its beginnings closely tied to Ford's introduction of the economical Model T in 1908. In 1916, a Nebraskan named Joe Saunders was supposedly the first person to start a rent-a-car business when he lent out his Model T to traveling salesmen. (Mr. Saunders' first customer is said to have been a salesman needing transportation for a date with a local girl.) 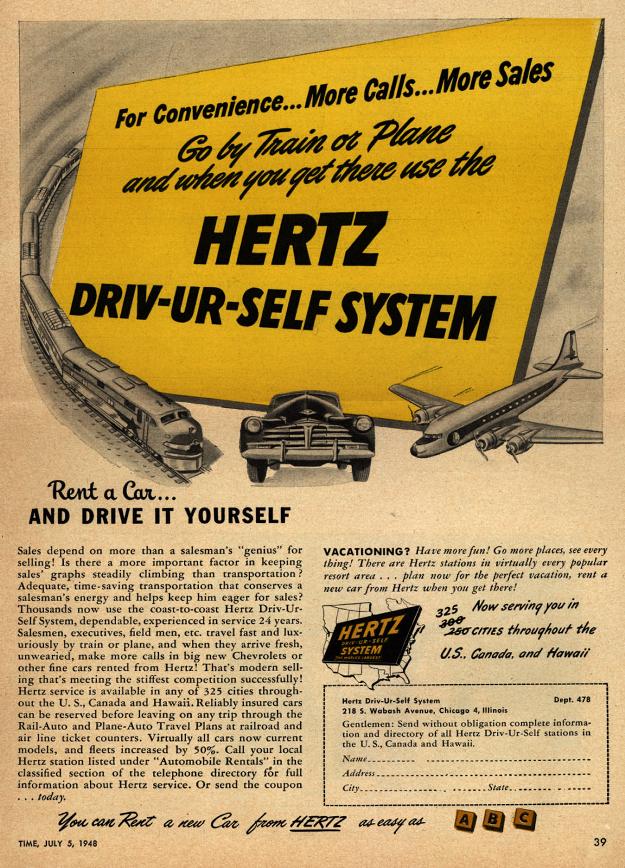 In September of 1918 in Chicago, Walter L. Jacobs, then only 22 years old, opened a car rental business. He began with about a dozen Model T Fords, repairing the cars himself, and by 1923 his car rental business was generating $1 million in annual revenues. The Yellow Cab and Yellow Truck and Coach Manufacturing Company, owned by John Hertz, acquired Jacobs' business. General Motors then bought out Hertz's Yellow Truck Company in 1926. The car-rental business became known as the Hertz Driv-Ur-Self System.

In these earliest years, rental car companies became associated with criminal activity, especially during Prohibition. Many believed that cars were often used by bootleggers, bank robbers and prostitutes. After the 18th Amendment was repealed in 1933, the industry was able to regain a respectable reputation, and the business grew.

In reaction to the growth of private ownership of automobiles, a number of railroads created Railway Extensions, Inc. In addition to car rental franchises, the group endeavored to encourage car rentals use by allocating space for rental booths at railroad stations, as well as subsidizing telegraph service for passengers to reserve cars at one station and pick them up at their destination. Of special interest is the fact that the railroads paid for advertising for the car rental dealerships at their stations. Railway Extensions, Inc. geographically spanned stations from Chicago to New Orleans. East of Chicago, the Hertz-controlled America Driv-Ur-Self negotiated a less substantial package that did not include free telegraph service or advertising or space for rental booths at railroad stations.

After the second World War, the car rental industry grew rapidly. This growth was linked closely with the boom in the airline industry. One of the most important steps in this growth was when Hertz developed the "fly-drive" car rental concept by opening franchises at airports in Atlanta and Milwaukee. Avis, another company, which was started by an Army pilot, centered almost all of its operations from airports and aggressively advertised services through the airlines themselves. The industry has been extremely competitive since the 1960s, when price wars and the success of small name renting companies forced prices down. It is an industry still closely linked with airline transportation

Bus companies, like rental car companies, began in the early 20th century in an effort to capitalize on public transportation needs. Bus operations began independently in various parts of the country to meet local needs. In Luling, Texas, a Packard vehicle was converted to carry passengers between railroad connections. After oil was discovered in areas north of Austin immediately after World War I, bus operations were especially profitable due to the lack of rail lines in Central Texas. Greyhound, one of the first bus companies, began as the Mesaba Transportation Company through the efforts of one man, Carl Eric Wickman. For 25 cents round trip (or 15 cents for one way), Mr. Wickman transported miners between the villages of Hibbing and Alice, Minnesota on a seven-seat Hupmobile. 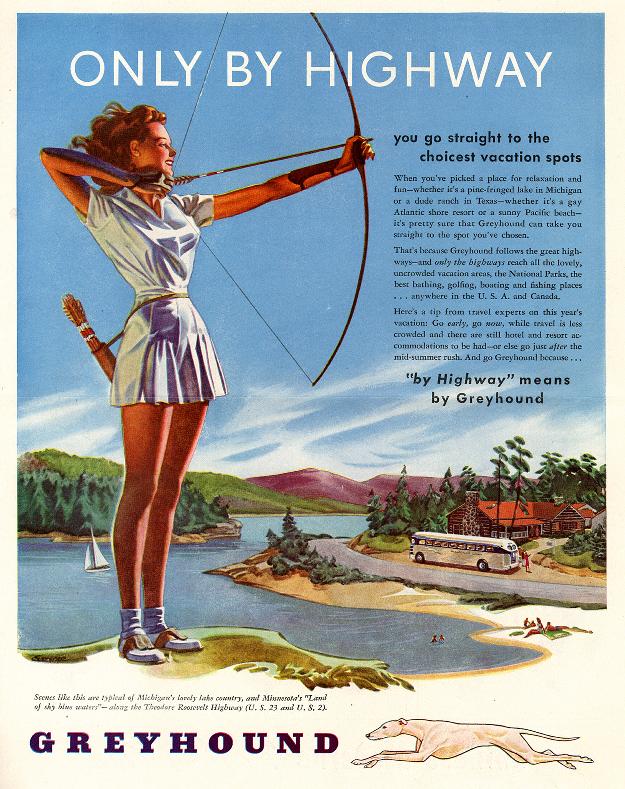 As bus lines emerged around the country, automobile manufacturers began designing vehicles targeted for bus use. An example of early bus design is found in the "Safety Coach" - seven rows seating four people each. These new buses were called "Greyhounds" as a result of their design and gray paint. As more paved roads crisscrossed Amercia and the production of buses increased in quality as well as quantity, intercity bus companies began to appear in larger numbers.

In 1926, there were over 4,000 small independent lines running between selected cities. The same year Wickman and Orville Swan Caesar (both owners of many of these regional lines) amassed additional bus lines and created the Motor Transit Corporation. Four years later, this company officially became The Greyhound Corporation. Aided by an advertising campaign highlighting the various scenic and historic sites around the country, Greyhound saw ever increasing earnings. Greyhound had bus routes that covered the majority of the United States by 1936. The other national carrier at this time was the National Trailways System. Under the aegis of the National Trailways System were smaller lines, such as the Santa Fe Trailways, that primarily had been railroad-owned bus lines.

WWII saw a dramatic increase in bus ridership. After the war years, though, bus travel began a decline as automobiles and airlines became more popular modes of travel. Intercity bus travel was still a popular and widely used method through the 1960s and 1970s, especially by people with limited travel budgets. At present the only remaining inter-city bus company with a national reach is Greyhound.

This category deals with the many modes of mass transportation available during the first half of the twentieth century- airlines, rental cars, buses, trains and ships (2,658 ads)