Inflation, defined in the 1942 book War Without Inflation a general and continuous decline in the purchasing power of money, or, conversely, of a sustained upward movement in the cost of living," posed a serious threat to the wartime economy of America. As industrial plants converted to war-oriented production, fewer goods were available for consumption on the homefront. At the same time, government expenditures for these war materials and greatly increased employment put more money in the hands of more individuals. The result - more money competing for fewer goods - was a recipe for economic disaster. 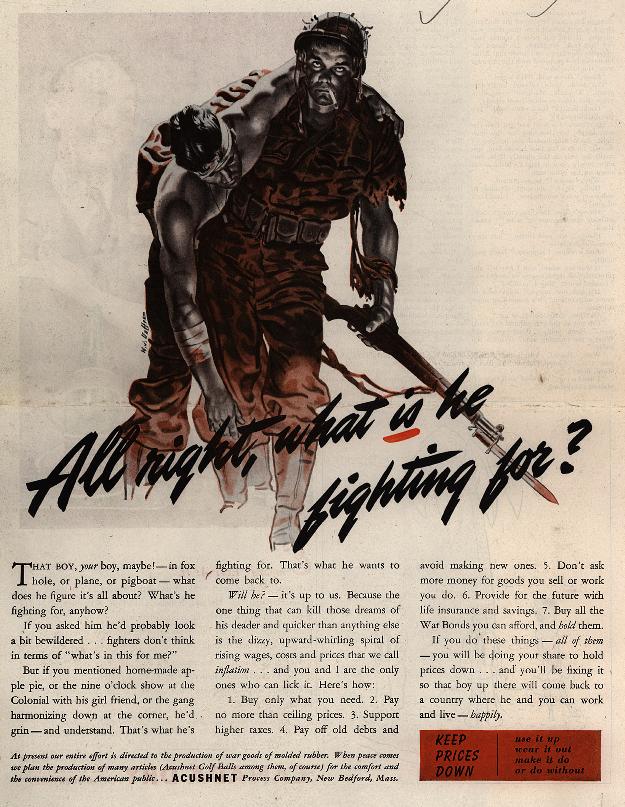 Faced with the challenge of heading off inflation before it began, the government formulated a plan calling for extensive advertising. Concluding that the best approach would be the truth, the Office of Price Administration (OPA) began educating the public to the dangers of inflation. This strategy was a risk, for many feared that once made aware of the threat, American would respond by either spending everything to stock up on goods, or by ceasing all purchasing.

Neither of these projections became a reality. Advertisements helped to convince American citizens that fighting inflation at home was vital to fighting the Nazis in Europe. Ads showed dire images of an inflation-burdened America and offered concrete steps to avoid this disaster. Outlining his anti-inflationary plan to Congress in April of 1942, Henry Morgenthau (Secretary of the Treasury, 1934 - 1945) announced "We cannot have all we want if our soldiers and sailors are to have all they need. Each and everyone of us will have to give up many things to which we are accustomed. Our standard of living will have to come down."

Messages such as this one not only sought to avoid the ruinous effects of inflation, but also served to promote home-front morale. The anti-inflation campaign also encouraged investment in War Bonds as a safe and smart way to spend extra money, thereby contributing to the war finance effort. 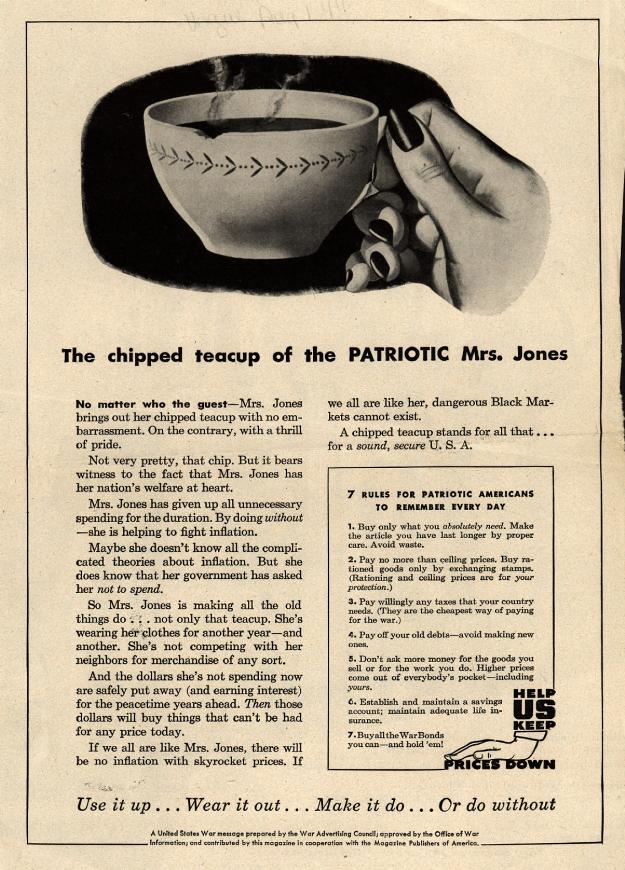 In addition, The War Finance Committee's Payroll Savings Plan was designed as an anti-inflationary measure. Used in conjunction with bond drives, the Payroll Savings Plan asked Americans to pledge 10% of every paycheck toward the purchase of bonds, which served to curtail consumption on a continuous and regular basis.

The Office of Price Administration also asked the women of America to shop carefully, by observing price caps posted in participating stores, and also encouraged them to conserve food and recycle supplies. Rationing of food, such as sugar and meat, and rationing of gasoline was instituted not only to promote fair access to scarce goods, but also to ensure less consumption on the home-front.

The government effort could be counted, for the most part, as a success. Between 1940 and 1945, the cost of living in America increased by a total of 28%, which compared favorably to the 62% rate of inflation the nation experienced during World War I. During the last two years of the war, at the height of OPA's efforts, consumer prices increased by less than 8%, although perhaps the program's greatest success was its contribution to home-front morale.

Click the link below to browse anti-inflation advertisements (1943-1945) in the Ad*Access digital collection: