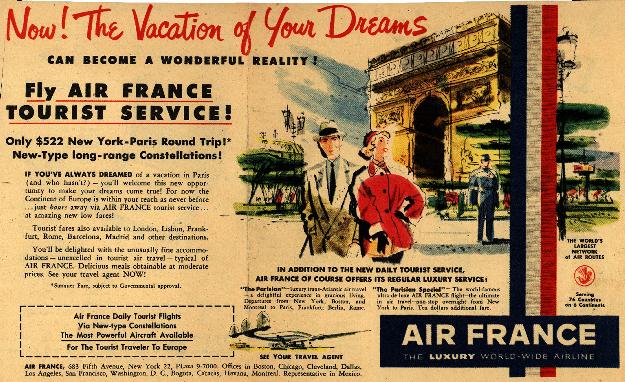 The Transportation (1938-1957) category is broken up into several sub-categories:

A brief history of each mode of transportation, along with links to browsable searches of each category, are included in subpages linked from the above list.

In 1903, the Wright brothers' first successful flight in Kitty Hawk, North Carolina marked the beginning of the aviation industry. In the early years, the public did not embrace airplane travel as an option, thinking that it was too dangerous. The first major stimulus that helped to develop the industry was the United States' participation in World War I. After the war, though, the government stopped funding research and development, practically stagnating growth in the aviation industry. In 1927, Charles Lindbergh successfully completed a solo flight across the Atlantic Ocean and created massive interest in flying with the general public.

One of the biggest factors in the growth of the air transportation industry during this time  was the development of a mail transport system by the U.S. Postal Service. The Kelly  Airmail Act of 1925 provided private airlines the opportunity to function as mail carriers  through involvement in a competitive bidding system. These private carriers, through the  airmail revenue, could then expand into carrying other forms of cargo, including  passengers. Charles Lindbergh, in the position of "technical adviser" to Pan Am World  Airways, piloted that airline's first airmail service flight to South America in 1929.

Passengers were targeted as a way to augment the income of the airmail systems. Slow starting, due to the perception of less than stellar safety performance and high fare costs, passenger volume grew tremendously and carriers multiplied. The Air Commerce Act, passed in 1926, allowed Federal regulation of air traffic rules. The aviation industry backed the passage of this act, believing that without the government's action to improve safety the commercial potential of the airplane would not be realized. Air traffic became more and more disorganized and the need for regulation became apparent. The postmaster general took control over the industry for a short time by limiting the number of carriers that were granted mail transport contracts. This practice was ruled anti- 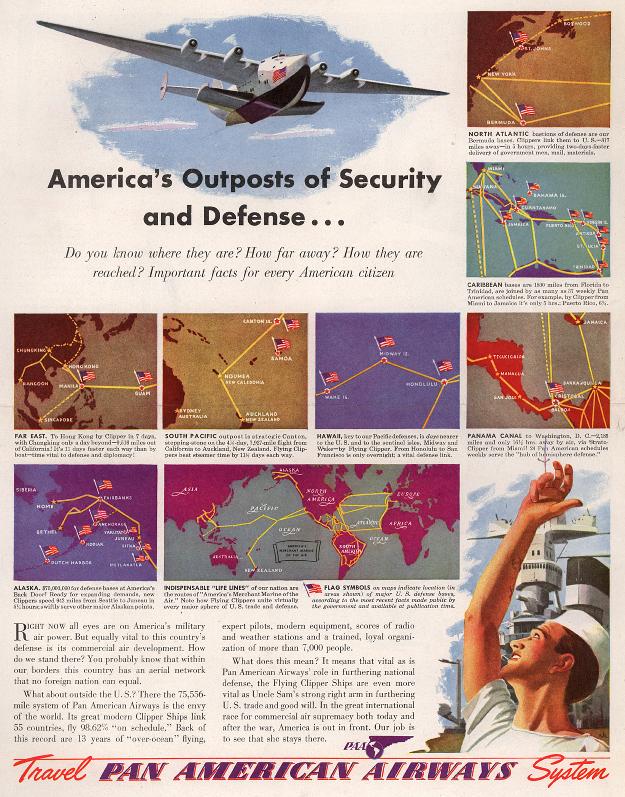 competitive and the industry was again opened up to competitive bidding for mail contracts. In 1938, the Civil Aeronautics Authority, an independent regulatory bureau, was developed. That same year, many air transport companies were flying the new DC-3s. These planes, created to carry both mail and passengers, were wide enough to seat 21 people. The design of the DC-3 also allowed for 14 seats and three berths - for sleeping on long flights. Famous child actress Shirley Temple was the first to purchase a sleeping berth ticket on an American Airlines DC-3.

With United States' entry into World War II, commercial fleets and pilots were sent to Europe to participate in the war effort. The war also helped to generate support for research and development of aircraft, which extended beyond the war to commercial aviation. A major post-war development was the four-engine aircraft, such as the Lockheed Constellation. This innovation substantially cut the flying time for ocean and continent crossings, and thus negatively effecting travel by ocean liner and train. The 1950s saw dramatic improvements in the capacity and comfort of commercial flights. Planes were modernized, and jet service was introduced in 1959, enabling even faster cross-country service.

After major in-air collisions in the 1950s, the Federal Aviation Act was passed in 1958. The Federal Aviation Administration (FAA) was created, and was charged to develop an air traffic control system. The 1970s saw dramatic increases in costs, particularly increases in fuel prices. The 1980s were marked by the deregulation of the industry, which resulted in the growth of smaller carriers and the mergers of larger carriers. The 1990s saw a dramatic increase in the number of passengers, including first time passengers, as prices were cut and the cities served by airlines increased.

This category deals with the many modes of mass transportation available during the first half of the twentieth century- airlines, rental cars, buses, trains and ships (2,658 ads)