Both the government and private corporations created advertisements advocating smarter and more cautious use of resources. The shift to war materials production had already limited the amount of goods available for consumer assumption, and the government imposed rationing program had further curtailed use of specific supplies. However, the government needed Americans to do more than comply with rationing measures, and thus consumers were deluged with government sponsored messages urging them to avoid waste. Food, clothing and a variety of essential items were to be used wisely. Avoiding purchasing items through a black market and acting in the interest of the greater community were strongly encouraged, both to hold down inflation and to ensure that 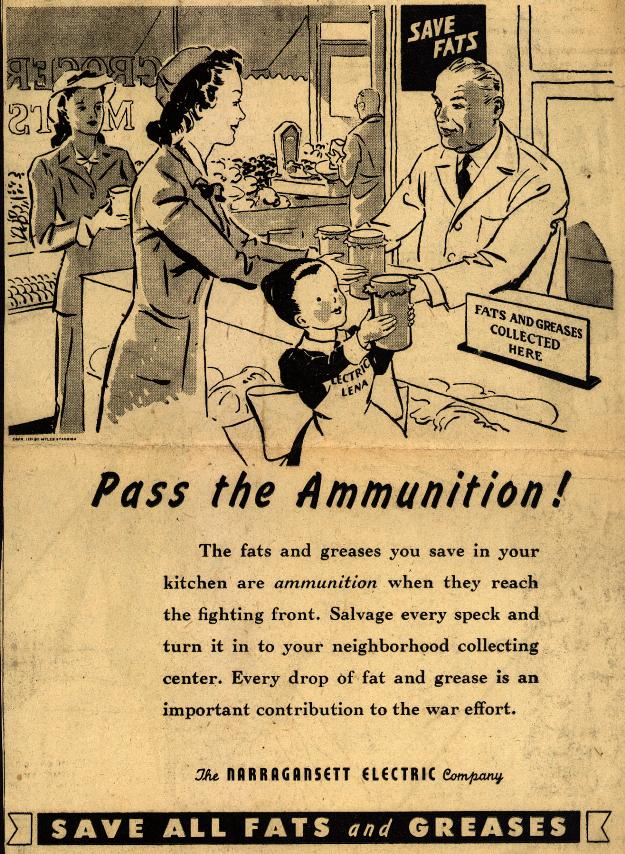 scarce items would be available for everyone.

In particular, women were told emphatically "Food is a weapon!" The government instituted the National Wartime Nutrition Program, asking women to make certain their families got enough to eat, but to only prepare what their families could consume in one sitting. Advertisements directed at patriotic women called for "Meatless Days" while providing recipes that used bread scraps or assorted leftovers.

In addition, Americans on the home-front were urged to save their waste kitchen fats. The glycerin in recycled fats was used in gunpowder, sulfa anti-infection drugs, the smallpox vaccine, and ammunition. Advertisements appealed directly to women, suggesting the storage of waste fats could directly aid a wounded soldier or the dropping of a bomb.

Americans were also called upon to save and recycle bottles, cans, scrap metal and paper, among other things. In particular, advertisements advocating paper recycling showed a multitude of uses for waste paper, including use in shell containers, blasting kegs, bomb rings and parachute flares.

Click the link below to browse images in the World War II conservation category: