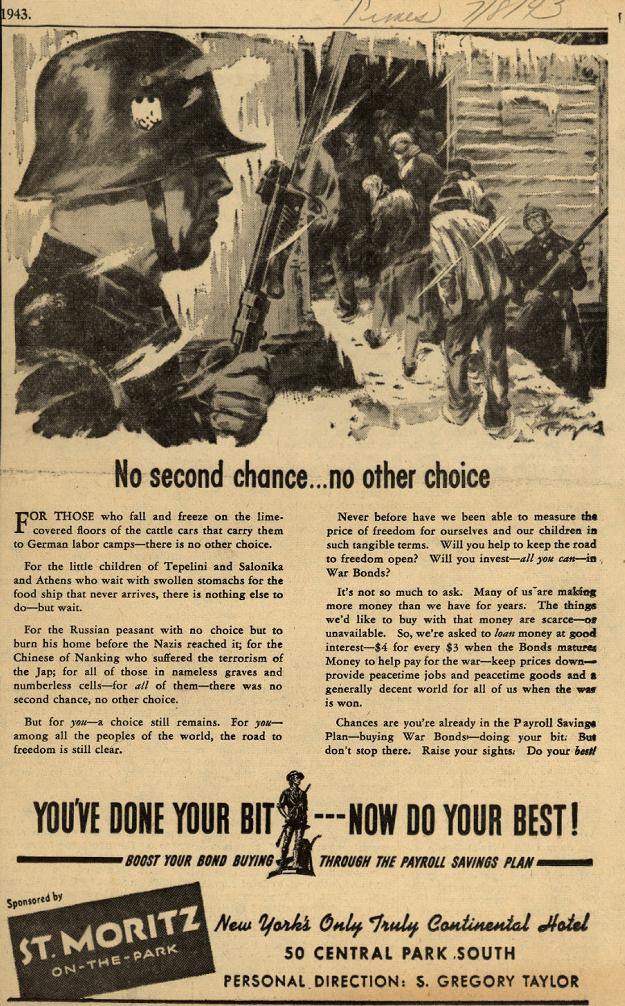 On May 1, 1941, the first Series E U.S. Savings Bond was sold to President Franklin D. Roosevelt by Secretary of the Treasury Henry Morgenthau. On January 3, 1946, the last proceeds from the Victory Bond campaign were deposited to the Treasury. The War Finance Committees, in charge of the loan drives, sold a total of $185.7 billion of securities. This incredible mass selling achievement (for helping to finance the war) has not been matched, before or since. By the end of World War II, over 85 million Americans had invested in War Bonds, a number unmatched by any other country.

The War Finance Committee oversaw the sale of bonds. The Committee's first duty was to determine whether the government would pay for advertising or seek space contributions from magazines and newspapers. When an estimation of the cost of a nationwide, multi-media campaign for a year reached $4 million, the Committee elected to solicit space donations for bond advertisements. This decision proved highly successful. Over a quarter of a billion dollars of advertising was donated in the first three years of the Defense Savings Program. After one month alone, over 90% of Americans polled were aware of the Payroll Savings Plan part of the campaign, leading one advertising executive to note that "no promotional campaign, commercial, governmental, or Goebbel's has ever spread its basic message so broadly, so quickly." (Samuel, p.26.)

Information about bond drives reached the public in two forms - advertisements created and endorsed by government agencies, and those created by private companies and organizations. Those who contributed space felt that they were doing more for the war effort than if they had been paid, while corporate sponsors of government ads and those organizations which produced their own advertisements for War Bonds proved their patriotism to the consumer public. 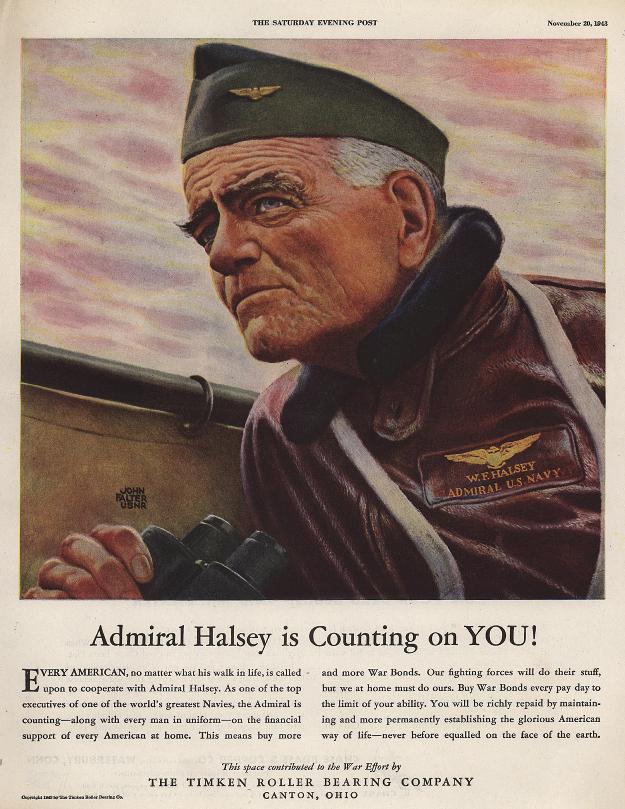 Originally, newspapers and radio were to be the focus of government initiated ad campaigns, due to their broad audiences and ability to keep current on events abroad. Because most magazines were published only weekly or monthly and were geared towards a certain readership, a wide variety of advertisements that could be adapted to suit the needs of individual publications had to be created. In some ways then, the magazine War Bond advertising program was an even greater achievement than the advertising program of the newspapers.

The war bond campaign was a unique fusion of nationalism and consumerism. Seeking to stir the conscience of Americans, it invoked both their financial and moral stake in the war. The sale of war bonds provided a way in which patriotic attitudes and the spirit of sacrifice could be expressed, and became the primary way those on the home-front contributed to the national defense and war effort. One observer noted, "It was a program that instead of seeking to eradicate differences...would make them a source of strength and unity by finding a common cause in which all could work for the financial security of themselves and of their country." While the initial goal of the war bond campaign was to finance the war, the positive impact on the morale of home-front Americans was perhaps its greatest accomplishment.

Seeking revenue continuity, the "drive" technique, used exclusively during World War I, was dropped in favor of continuous promotion of bonds. However, eventually a dual method, which would combine long-term investment on a monthly basis (e.g. Payroll Savings Plan) and occasional short-term campaigns was adopted. Over $180 million worth of radio, print, and outdoor advertising was donated and over $156 billion raised in the eight war loans.

The First War Loan began on November 30, 1942 and ended December 23, 1942. Its sales totaled almost $13 billion, surpassing the goal of $9 billion. However, only $1.6 billion of this was sold to individuals, while corporations and commercial banks accounted for most of the remainder of the total.

On April 12, 1943, the Treasury Launched the Second War Bond Drive. Upon its completion on May 1, 1943, over $18.5 billion had been invested in the war effort - $5 billion over its $13 billion goal. Individual subscriptions doubled from the first drive, probably as a result of the over $4.5 million and $170,000 worth of advertising contributed by newspapers and magazines, respectively. The Second War Loan alone totaled 90% of the combined loan sales of World War I.

The $15 billion goal of the Third War Loan meant that the record amount of bonds sold in a single month would have to be more than doubled, and over 40 million of America's 130 million citizens would have to invest in a $100 Series E Savings Bond. President Roosevelt gave a rousing address on the evening of September 8, 1943 to start the loan drive and on September 21, 1943 Kate Smith raised $39 million through a telecast on the Columbia Broadcasting System. Over 152,000 advertisements placed in newspapers to promote the drive between its Sept 9, 1943 starting date and its close on October 2, 1943 represented only a fraction of the estimated $23.4 million worth of donated advertising. Over 107% of the individual sales quota was reached, and the Third War Loan's final sales totaled almost $19 billion.

Begun on January 18, 1944, and ending almost a month later on February 15, the goal for the Fourth Bond Drive was set at $14 billion. Largely targeted at farmers and women, almost $25 million worth of advertising was contributed in support of the drive, and over 6 million Americans donated their time as volunteer salesmen. The result was sales of almost 70 million separate E Bonds, or 107% of the quota. $16.7 billion was sold during this war loan drive.

June 12, 1944 marked the beginning of the most ambitious war financing campaign. The $16 billion goal of the Fifth War Loan was the largest of the eight, but by its conclusion on July 8, 1944, $20.6 billion had been sold. It came at a critical time, as the tempo of war had increased dramatically. Production rates were hitting new peaks, while availability of goods was low and consumer earning rates were high. An estimated $42.7 worth of advertising was contributed towards the loan campaign, which served to thwart inflation as well as to finance the war.

Attempting to capitalize on the surge of patriotism following Allied successes in Europe, November 20, 1944 marked the commencement of the Sixth War Loan. Promotion of this program was reoriented to appeal to American's perception of the Japanese as primary enemy, and well over $11 million of advertising was donated toward these ends. By the end of the Sixth War Loan on December 16, 1944 $21.6 billion had been raised.

Elaborate plans were made for the Seventh War Loan. Nationally planned special promotional events far surpassed those planned for any other bond drive, and the Office of War Information pledged 50% of all available radio time to advertisement of the Seventh Loan. An additional $19.1 million was contributed to advertising in support of the drive, and the combined estimate surpassed $42 million in free advertising. Beginning on May 14, 1945, just a few days after V-E Day, some officials feared the goal of $14 billion would not be reached if Americans believed the surrender of Germany made full subscription unnecessary. These fears proved unfounded, as the individual sales goal of $7 billion - the highest of any war bond drive - was surpassed by $1.6 billion. The final tally recorded sales of over $26 billion dollars during the six weeks of the Seventh War Loan drive.

The Eighth War Loan occurred between October 29, 1945 and December 8, 1945. The only drive without the stimulus of ongoing war, only the $9 billion quota of the First War Loan was less than that of the $11 billion Victory Loan quota. However, by the program's end, over $21 billion had been raised, representing an achievement of 192% of the goal, the highest percentage of any war loan.

Click the link below to browse War Bonds advertisements. Use the facets on the left to explore sub-sets of War Bond advertisements including beauty & hygiene and specific War Bond drives: