Films for the Humanities
Muslims in America [videorecording] : Islam in exile.
Princeton, NJ : Films for the Humanities & Sciences, c2003.
Lilly Library A-V DVD - DVD 2292 Check availability @ Duke
Notes: "Examines the surprisingly rapid growth of Islam in the heart of America's Bible Belt, a predominantly fundamentalist Christian locale. Yet for Muslims living in Appalachia, the daily challenge lies not so much in acceptance by their neighbors as with practicing their religion in a country whose overall culture is so often at odds with their own beliefs. Interviews with refugees living in the region and with experts in American Islam reveal the resiliency of a faith that can thrive in exile. The history of Islam, Islamic contributions to the arts and sciences, and common ground between Muslims and Christians are also highlighted."

Contents: Foreword by Joe Feagin; Introduction; Part I: The History, Present Status, and Public Portrayals ch. 1: How They Came to America and Where They Are Today; ch. 2: Stereotypes of Islam and the Dubious Link with Terrorism; ch. 3: "Us" Versus "Them"; Part II: Everyday Experiences with Discrimination; ch. 4; The Stigma of Brown Skin and "Foreign" Names; ch. 5: The "Thin Veneer of Civility": Relearning the American Dream; ch. 6: Living with Discrimination; ch. 7: "I Am a Middle Eastern American!": Ethnic Self-Identification; ch. 8: "Whining" for Social Justice?

Summary: A history of Arabs in the United States with illustrative documents, appendices, and bibliography.

Oweis, Fayeq.
Encyclopedia of Arab-American artists.
Westport, Conn. : Greenwood Press, 2008.
Lilly Library N6538.A73 O94 2008 Check availability @ Duke
Arab-American artists are much like other Americans. Some were born in the States, others are immigrants, and some have one parent of another ethnicity. In this biographical encyclopedia readers can find information on Arab-American artists working in a wide range of media. Most entries have photos of the artists along with a list of articles about them. While only a few pieces of art are shown in a color insert, every entry contains a list of websites where one can find examples of the artists' work.

Qazwini, Hassan.
American crescent : A Muslim cleric on the power of his faith, the struggle against prejudice, and the future of Islam and America.
New York : Random House, 2007.
Divinity School Library BP80.A5296 A68 2007 Check availability @ Duke
Contents: Husayn vs. Hussein -- Struggle in Iran -- Sacred journey -- The idea of America -- Bridge building -- The Muslim capital of the West -- Paranoid America and 'Islamofascists' -- Carrying the mission to the halls of power -- Our American Bin Ladens -- Lines in the sand -- Return to the cradle -- The Islamic frontier.

United States Census Bureau
We the People of Arab Ancestry in the United States
http://www.census.gov/prod/2005pubs/censr-21.pdf

To see an up-to-date selection of works on relevant topics available at Duke Libraries, click on the links below:
> Arab Americans
> Arab-American Women 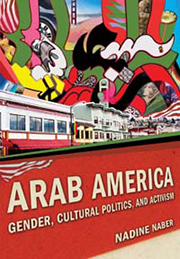 U.S.-Muslim Engagement Project in affiliation with the Search for Common Ground (SFCG) organization released a report entitled Changing Course: A New Direction for U.S. Relations with the Muslim World.

The report "represents the consensus of an exceptionally diverse, senior, bipartisan and inter-faith group of 34 American leaders who have worked together over the last 18 months. Their work was supported by Search for Common Ground and CBI, two organizations that specialize in building consensus on controversial public issues."

The Great Divide: How Westerners and Muslims View Each Other
(Pew Global Attitudes Project)

The first section of the report analyzes how people in predominantly Muslim countries and non-Muslim countries view each other. This section examines the positive and negative characteristics Muslims associate with Westerners - including Muslim minorities in four Western European countries - and the traits that non-Muslims associate with Muslims. Section II focuses on opinions about the state of relations between the West and Muslims. It also explores reasons people give for Muslim nations' lack of prosperity, attitudes to the recent controversy over cartoon depictions of Muhammad, and Muslim opinions on whether Arabs carried out the Sept. 11, 2001 terrorist attacks.