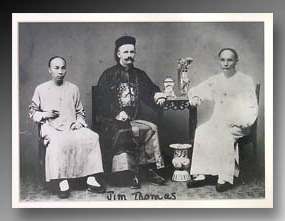 Occupying most of the second floor of Bostock library, the East Asian Collection focuses on modern and contemporary Chinese, Japanese and Korean materials in the humanities and social sciences.  With over 155,000 volumes (approximately 85,000 in Japanese, 52,000 in Chinese and 20,000 in Korean as of 2012), and many databases in Japanese, Chinese and Korean, this expanding collection is recognized as a regional resource center for researchers and students in the field of East Asian studies.   Although the collection began with  a gift of 1500 volumes from James A. Thomas in the late 1920s and noteworthy purchases of Japanese materials in the late 1960s, significant and systematic growth in East Asian materials, especially Chinese and Korean, dates from the 1990s.

The Japanese collection has notable strengths in 19th and 20th century materials.  It is particularly strong in modern art history,  Buddhism, Japan’s colonial history, women’s and labor history, the modern novel, manga and anime and other forms of popular culture (film, advertising, and women’s magazines).  Premodern social, economic and legal history are well represented, and basic materials are collected in premodern history, literature and religion. The collection also contains works in Japanese on Chinese art history, Daoism, US-Japan relations, and the Olympics. 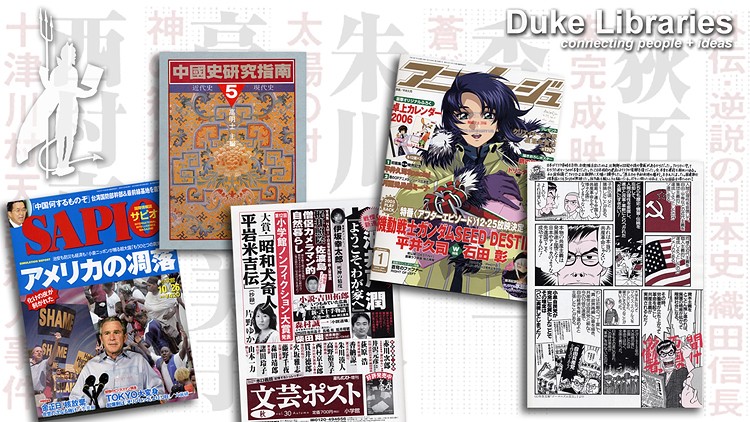 Duke began to build a Chinese collection in the mid-1990s when it modified its longstanding cooperative collection development agreement with University of North Carolina at Chapel Hill (UNC), which held collection responsibilities for Chinese materials. Duke concentrates on materials not collected in depth at UNC, especially popular culture and the contemporary social sciences. It has built a unique collection of popular magazines and newspapers, a sizeable collection of Chinese film and TV dramas (over 4000 titles), a strong collection of statistical resources and core titles in literature and history.  UNC is strong in Chinese history, literature and religion.

The Korean collection began to grow in the late 1990s, and has expanded significantly since 2007.  Its strengths include Buddhism, the colonial experience, history, linguistics, literature and film (over 1000 titles) as well as materials to support Korean language teaching.

Duke’s David M. Rubenstein Rare Book and Manuscript Library includes reports from missionaries, early British diplomats to Japan,  East India company papers, diaries and letters from merchants and seamen as well as items in such collections as the Stereographic card and postcard collections and materials related to advertising in the Hartman Center.  For Japan, it also has the Papers of General Robert L. Eichelberger (1886-1961), who commanded all ground occupation troops in Japan (1945-1948).   Recent acquisitions include materials relating to the Japanese student movement in the 1960s and the photographs taken by Sidney Gamble in China (1917-1932).