The German Broadside Collection spans the years 1905-1990, with the majority of items dating from the 1920s. Formats include broadsides, leaflets, handbills, campaign publications, political brochures, propaganda posters, and other ephemera documenting the political, economic, and social conditions in Germany, Eastern Europe, Russia, and China, particularly during the Weimar Republic. Many of the broadsides relate to elections during the 1920s and the legacy of World War I as well as the political implications of women's suffrage during that time.

Political parties represented include the Socialist Party, the Communist Party, the German Democratic Party, and the German National People's Party, as well as several smaller parties. The broadsides come from cities across Germany, with Leipzig and Berlin strongly represented. Additional materials include Allied propaganda leaflets and Holocaust exhibition posters, as well as materials relating to the assassination of German Foreign Minister Walther Rathenau in 1922.

The papers of Wilfried Henkel, former managing director (Geschäftsführer) at the J. Walter Thompson Company (JWT), Frankfurt office, span the years 1957 to 1987, with the bulk of the material dating from 1975 to 1984. The collection consists of articles and presentations (typed or offprints) accompanied by charts and graphs, typed and handwritten correspondence, external and internal memoranda, as well as press clippings and other printed material, and documents Henkel's activities during his tenure at the Frankfurt office, where he was considered the "chief ideologist." Throughout his time in Frankfurt, Henkel worked on individual accounts, but more importantly he was one of the early proponents of corporate advertising, especially in the form of corporate identity and corporate communications. In addition, he worked extensively on JWT's corporate strategy, the T-Plan (target plan).

Specific topics documented in the Wilfried Henkel papers include the philosophy of advertising as evidenced in particular (mostly German) advertising campaigns; analyses of agencies', businessmen's, and customers' attitudes toward advertising; JWT's corporate philosophy as presented in the T-Plan; presentations on the future of advertising; and individual advertising campaigns--including Deutsche Bank, Deutscher Wein, Fichtel and Sachs, Flachglas, Ford Motor Company, Frankfurter Hypothekenbank, Hercules, and Zanders--supervised by Henkel for JWT. While the general files in the Henkel papers document communication between JWT and its clients as well as within JWT, other parts of the collection contain a high percentage of presentations and talks.

Search the Rubenstein catalog for "Germany -- Periodicals" as a subject heading.

Or check out the German Newspaper Clippings Collection, 1900-1943 here:

The newspaper clippings in this collection focus on political events both in Germany and abroad, in particular assassinations and political violence, and include numerous political cartoons. The clippings are arranged according to geographical area. Also included are clippings and campaign publications relating to local, state, and national elections in Germany between 1919 and 1930, as well as clippings relating to events happening internationally between 1900 and 1930. The collection also includes a small series of Nazi propaganda dating from 1939 to 1943.

An die Laterne.Berlin, 1919: "Distributed in editions of twenty-eight million throughout the country, An die Laterne was successful in using the radical look of expressionist graphics to attract an audience initially sympathetic to Communist ideas and turn it to the more moderate political message of the SPD government.”  From "War, revolution, and the transformation of the German humor magazine, 1914-27," Sherwin Simmons, Art Journal, Spring, 1993.

Arbeiter-illustrierte Zeitung.  Berlin, 1924-1936: An illustrated magazine with strong ties to the Communist party of Germany.

Die Freie Welt. Berlin, 1919: “Caricature was one of Die freie Welt's most important weapons, and drawings that commented on contemporary political issues appeared both as full-page covers and as smaller images on the inside pages. Daumier's drawings were frequently reproduced, and Karl Holtz contributed his bitter attacks on the government and the Freikorps to almost every issue. The magazine also prided itself on publishing Grosz's caricatures despite the government's censorship of his work. Equally unusual for the Left was the magazine's use of photographs, the first socialist response to the bourgeois illustrated press.” From "War, revolution, and the transformation of the German humor magazine, 1914-27," Sherwin Simmons, Art Journal, Spring, 1993.

Kriegszeit. Künstlerflugblätter. Berlin 1914-1916: A weekly German cartoon publication featuring attacks on England and Russia. Usually portrays England as a large seal balancing the world on the end of her nose, and Russia as a clumsy bear. Also some morale cartoons appealing to Germanic nationalism and sentimentality.  Profusely illustrated throughout with lithographic images by leading German artists of the day showing scenes from the war front and everyday life in German society.

Kladderadatsch. Berlin, 1848-1944: The "Kladderatsch" is Berlin slang for "falling and breaking into fragments." The magazine, founded by bookseller Albert Hoffmann and acclaimed writer David Kalish, it focused on  political satire, through articles [especially Ernst Dohm and Rudolf Lowenstein] and caricatures [especially Willhelm Scholz]. Especially of importance is the first year of its publishing, since it refers to the events of the 1848- revolution in Germany, where the first German parliament, the "Frankfurter Nationalversammlung" was founded at Paulskirche, Frankfurt. The political line of the periodical was moderate nationalistic [it supported Bismarck]. During the Weimar Republic, it drifted more to the right and eventually supported the Nazis openly. Full run available online at: http://www.ub.uni-heidelberg.de/Englisch/helios/digi/kladderadatsch.html

Die Pleite.  Berlin ; Leipzig, 1919-1924: Edited by George Grosz. “Grosz's well-known drawing, Prost Noske!--das Proletariat ist entwaffnet! |Here's to Noske!--The proletariat is disarmed!, which appeared on the cover of Die Pleite in early April 1919, was one of several means by which Berlin Dadaists attacked the violence perpetrated by the Freikorps against civilians. The drawing shows an officer, whose helmet bears the insignia of the Reinhard Regiment, proposing a toast to their victory over the proletariat.” From "War, revolution, and the transformation of the German humor magazine, 1914-27." Sherwin Simmons, Art Journal, Spring, 1993.

Friedrich Carl Peetz was a German sailor and crew member of the S.M.S. Hertha (part of the German East Asia Squadron) during the Boxer Rebellion in China in 1900.

The Friedrich Carl Peetz photographs collection consists of 127 black-and-white ambrotypes (several are hand tinted; most are 4.5 x 6 in.) mounted on 22 boards in a photograph album. The album probably belonged to Friedrich Carl Peetz, most likely an officer in the German Navy (Kaiserliche Marine) and crew member of the S.M.S. Hertha during the Boxer Rebellion. The images were mostly taken in Tsingtao (Qingdao), Chefoo (Yantai), Hong Kong, Peking (Beijing), and Shanhaiguan during the Boxer Rebellion in 1900. The photographs document the German involvement in the Rebellion and primarily depict damage to the Taku Forts, German ships (most are identified) and crew, and temples and other historic buildings visited by the Germans in Beijing and other locales in China.

To find this collection in the Rubenstein's catalog in order to request items to view in our reading room, click here. 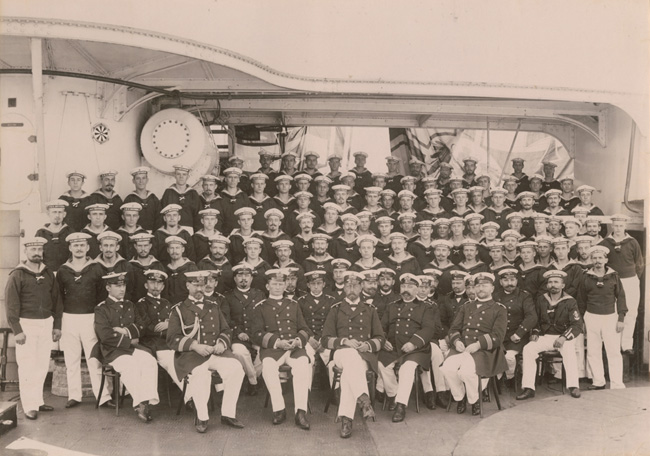 Publications by the German Army

Search the Rubenstein's catalog for "Germany. Heer." in the Author field, in order to find items published by the German Army, primilary during the twentieth century.

Check out the Vincent Cianni Photographs 1983-2004 for the photographer's work in Berlin in 1990: Accession (2007-0200) contains 65 gelatin silver prints and photographic collages of East Berlin, the destruction of the Berlin Wall, and the reunification of Berlin, 1990. Print range in size from 8x10 to 16x24 and are captioned and signed on back by photographer.