Search the library catalog for items in the Rubenstein using "German Americans" as a subject heading here.

Refine your search by consulting additional subjects as listed with your search results. Alternatively, use keyword searches to find relevant sources and use the subject headings used to identify additional material.

Henkel Family Papers, 1812-1953 and undated: This collection includes correspondence (1812-1894), account books, and notes for sermons, articles and lectures, belonging to the Henkel family. The primary authors are Solomon and Ambrose Henkel, and their nephew, Socrates Henkel, prominent Lutheran churchmen. Includes information on the Lutheran Church in Virginia, Tennessee, and North Carolina, and on the publishing house Henkel Press, Inc., at New Market, Virginia. Some of the material is in German. The correspondence touches on many subjects, chiefly church matters, but there is a small group of Civil War letters from Henkel family members recounting battles (Fort Sumter; Mine Run, Va.), Union occupation, and camp life. One letter from 1860 mentions the hanging of an abolitionist. Also included is a diary begun in 1802, written by Paul Henkel, with a transcription; there are also miscellaneous writings, items relating to religious music, and advertisements.

Duke Libraries also currently has a printing press used by the Henkel Family on display in Perkins Library.

If you search for Publisher -- Henkel in the Rubenstein Library's catalog, you'll find printed works published by the Henkel Family.

For Henkel Family material outside of the Rubenstein Library, check out the National Library of Medicine's digital collection, which has a focus on physicians in the Henkel family. 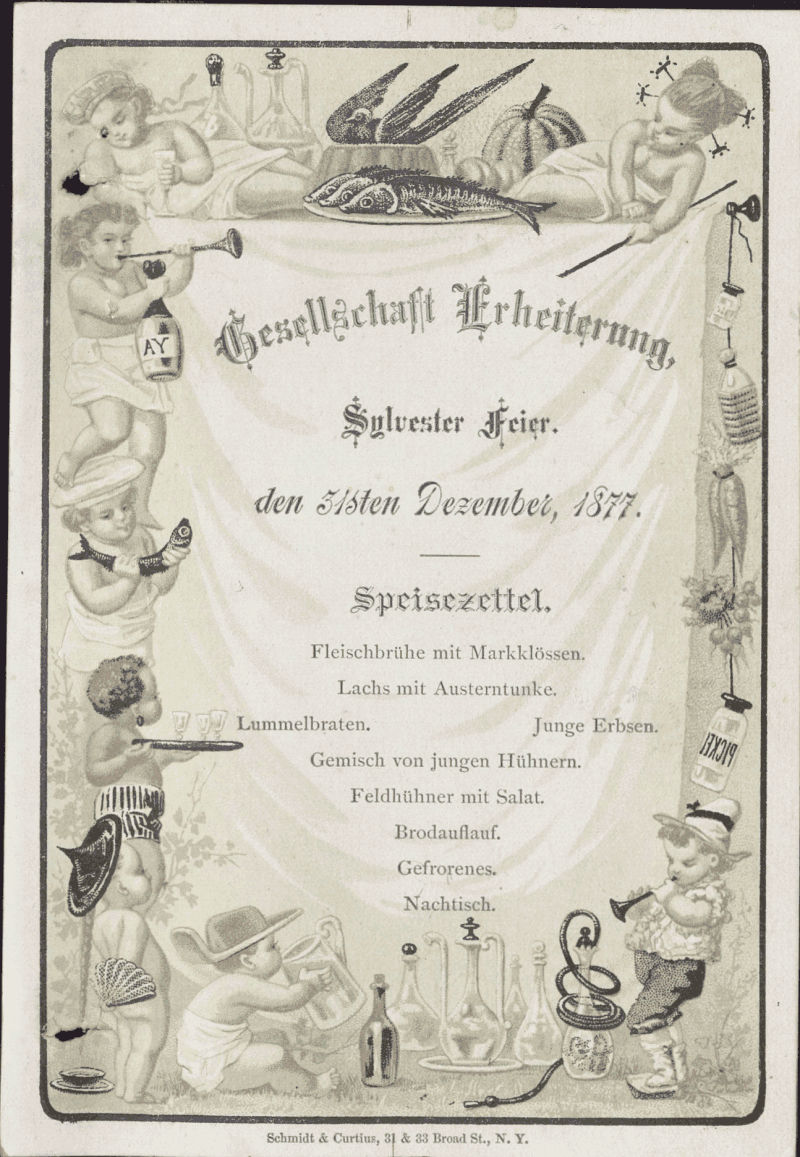 A menu from the Gesellschaft Erheiterung activities collection.

Below are several examples of manuscript collections that relate to German Americans and their experiences across the United States. Search the catalog for more!

John D. Cappelmann papers, 1861-1970 bulk 1880-1926: Lawyer of Charleston (Charleston Co.), S.C. Represented the county for two terms in the state's general assembly; member of the Confederate Army's German Artillery; and member of the Charleston City Council under T.T. Hyde. Also, officer in the National German American Alliance and active in the United Synod of the Evangelical Lutheran Church in the South. Married Julia Pieper in 1882. This collection comprises material documenting John D. Cappelmann's numerous activities. Includes advertisements, church bulletins, invitations, tickets, and programs for balls, orations, literary society meetings, concerts, dances, baccalaureate exercises, recitals, and bicycle races. In addition, there are notices for events and general orders concerning the German Artillery, as well as information on other Confederate memorial events. Topics of interest include the peace movement during World War I; the anti-German and anti-German American sentiment of the period; Lutheranism in the early twentieth-century South, especially regarding the Sunday School movement.

Dunlop Family Correspondence, 1802-1875: Personal correspondence of the Dunlop and Rife (or Reiff) families, united by the marriage of Elizabeth Dunlop and Daniel Rife. The bulk of the letters are concerned with the West before 1860, and discuss such matters as farming and hog raising in Indiana, high wages in Illinois, and travel to the West. Adam L. Dunlop's letters come from Madison, Mo., while members of the Rife family wrote from various sections of the West. Civil War letters from William A. Dunlop, a Confederate soldier, comment on the First Battle of Manassas, Stonewall Jackson, courts-martial, desertions, camp-life, prisoners, and various battles. Several early letters are in German.

Gesellschaft Erheiterung activities collection, 1874-1879 and undated: An amusement club for German Americans living in Stapleton, Staten Island, N.Y. This collection contains a binder (87 pgs.) filled with materials related to club-sponsored activities, including concerts; musical theater; plays, and comedies; picnics; festivals; balls and holiday celebrations; and one "game supper." Laid-in are one issue each of the local amusement newspapers DER MOSQUITO and DER SALBADER, as well as a lyric sheet for sing-alongs that contains choruses for popular American songs of the period. On playbills, lists of characters were usually accompanied by penciled annotations of performers' names, most likely made by the unnamed owner of the binder.

George Henry Müller: Papers, 1798-1852: Diaries, memoirs, and reminiscences of Müller, a German immigrant of 1808, concerning his family, travels, early life in Germany and Great Britain, mercantile activities in Cuba, a shipwreck off South Carolina, his trip by stage from Charleston, S.C., to Baltimore, Müller family genealogy, the U. S. in the early 19th century, religion, English poets, and weather reports for Beaver, Pa. (1850-1852).

James Wall Scully papers, 1861-1910; (bulk 1861-1862): Surveyor and Union soldier. Primarily correspondence and papers of Scully while stationed in Nashville, Tenn., during the Civil War. The letters concern his services as clerk to Captain Alvan Cullem Gillem under General George Henry Thomas in Kentucky; the battles of Mill Springs, Kentucky, 1862, and Shiloh, Tennessee, 1862; living conditions of the times; the Germans of Pennsylvania; and the attitude of Southern women, especially those in Nashville, Tenn., toward Federal soldiers. Included also are army commissions signed by J. M. Dickinson, Andrew Johnson, J. M. Schofield, and William Howard Taft.

William G. Thomspon: Papers, 1756-1873; (bulk 1801-1864): Resident of Timberville (Rockingham Co.), Va. Letters and other papers of several Pennsylvania German families in the Shenandoah Valley of Virginia, including letters from George Shrader and others in Tennessee, Ohio, and Indiana. Topics include the availability of land in Indiana in the 1830s; prices of farm products near Baltimore and in Indiana; the panic of 1837; the abolition question in Woodstock, Va.; a drought in Ohio, 1839; and the transferability of money between states. There are a few letters from Civil War soldiers. Units mentioned include the 8th Star Artillery and the 12th Virginia Cavalry. There are also some miscellaneous legal papers.

Some items in this collection may be of interest: Click on the link to search for Harold Jantz Collection (David M. Rubenstein Rare Book & Manuscript Library) in the author field to find the contents of that collection in the Rubenstein Library.