A wide-ranging search for "German literature" in the Rubenstein catalog, limited to items in German, can be refined according to links that accompany it; science fiction, children's literature, and devotional literature are just a few of many possibilities.

The Rubenstein has an extensive collection of books about the Faust legend. Find some of them with a search for "Faust" in the title of works in German here.

The Rubenstein Library has several uncataloged German manuscripts in its collection. One, Gebete Der Passion, was created circa 1500 and is filled with illuminations and illustrations. 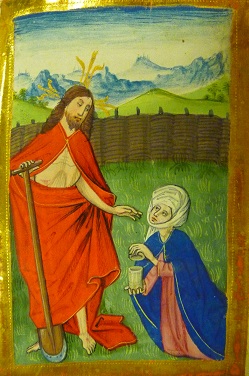 Please contact us to see it, or to learn more about our other German manuscripts.

The term "incunabula" refers to books, pamphlets, or broadsides that were printed before 1500; they are the very earliest works printed in Europe.

Search the Rubenstein catalog for items published in German between 1450 and 1499 in order to find our German incunables here.

Take a look at German incunabula in the British Museum, which includes 152 facsimile plates of pages printed in the 15th century. To find other facsimiles in our collection search our catalog using "Incunabula -- Facsimiles" as a subject keyword and limiting the results to those in German here.

For more information about our collection of incunabula, please contact us!

The Internet Archive has digitized many of the Rubenstein's emblem books here. Look through an example below! Emblem books are a genre of illustrated books that was popular from the 16th to the 18th centuries in Europe. From their website: Emblem books contain illustrations that often visually represent or illustrate a moral fable or an allegory. The illustration is often paired with a phrase of text, like a motto or an epigram, that further explains the image. Many emblem books serve a didactic purpose and explain virtues, vices, religious principals etc.

For more information on and examples of emblem books, check out Emblematica Online, a collaborative project between the University of Illinois at Urbana-Champaign and Herzog August Bibliothek, Wolfenbuttel. You can search and brows eacross significant levels of granularity through their digital collection of Renaissance emblem books, many of which are in German or are published in Germany.

Click on the link to search for Harold Jantz Collection (David M. Rubenstein Rare Book & Manuscript Library)    Published: 1532-1913
in the author field in order to find the contents of that collection in the Rubenstein Library.

We have numerous works by and about German poet Stefan George here at the Rubenstein.

Or take a look at the Stefan George Papers, 1939-1941, which are translations, 1939-1941, into English by Carol North Valhope and Ernst Morwitz of "The Books of Eclogues and Eulogies...," "Hymns, Pilgrimages, Algabal," "The Kingdom Come," "The Seventh Ring," "The Star of the Covenant," "The Tapestry of Life and The Songs of Dream and of Death with a Prelude," and "The Year of the Soul."

Search the Rubenstein catalog for "Germany -- Periodicals" as a subject heading.

Or check out the German Newspaper Clippings Collection, 1900-1943 here:

The newspaper clippings in this collection focus on political events both in Germany and abroad, in particular assassinations and political violence, and include numerous political cartoons. The clippings are arranged according to geographical area. Also included are clippings and campaign publications relating to local, state, and national elections in Germany between 1919 and 1930, as well as clippings relating to events happening internationally between 1900 and 1930. The collection also includes a small series of Nazi propaganda dating from 1939 to 1943.

An die Laterne.Berlin, 1919: "Distributed in editions of twenty-eight million throughout the country, An die Laterne was successful in using the radical look of expressionist graphics to attract an audience initially sympathetic to Communist ideas and turn it to the more moderate political message of the SPD government.”  From "War, revolution, and the transformation of the German humor magazine, 1914-27," Sherwin Simmons, Art Journal, Spring, 1993.

Arbeiter-illustrierte Zeitung.  Berlin, 1924-1936: An illustrated magazine with strong ties to the Communist party of Germany.

Die Freie Welt. Berlin, 1919: “Caricature was one of Die freie Welt's most important weapons, and drawings that commented on contemporary political issues appeared both as full-page covers and as smaller images on the inside pages. Daumier's drawings were frequently reproduced, and Karl Holtz contributed his bitter attacks on the government and the Freikorps to almost every issue. The magazine also prided itself on publishing Grosz's caricatures despite the government's censorship of his work. Equally unusual for the Left was the magazine's use of photographs, the first socialist response to the bourgeois illustrated press.” From "War, revolution, and the transformation of the German humor magazine, 1914-27," Sherwin Simmons, Art Journal, Spring, 1993.

Kriegszeit. Künstlerflugblätter. Berlin 1914-1916: A weekly German cartoon publication featuring attacks on England and Russia. Usually portrays England as a large seal balancing the world on the end of her nose, and Russia as a clumsy bear. Also some morale cartoons appealing to Germanic nationalism and sentimentality.  Profusely illustrated throughout with lithographic images by leading German artists of the day showing scenes from the war front and everyday life in German society.

Kladderadatsch. Berlin, 1848-1944: The "Kladderatsch" is Berlin slang for "falling and breaking into fragments." The magazine, founded by bookseller Albert Hoffmann and acclaimed writer David Kalish, it focused on  political satire, through articles [especially Ernst Dohm and Rudolf Lowenstein] and caricatures [especially Willhelm Scholz]. Especially of importance is the first year of its publishing, since it refers to the events of the 1848- revolution in Germany, where the first German parliament, the "Frankfurter Nationalversammlung" was founded at Paulskirche, Frankfurt. The political line of the periodical was moderate nationalistic [it supported Bismarck]. During the Weimar Republic, it drifted more to the right and eventually supported the Nazis openly. Full run available online at: http://www.ub.uni-heidelberg.de/Englisch/helios/digi/kladderadatsch.html

Die Pleite.  Berlin ; Leipzig, 1919-1924: Edited by George Grosz. “Grosz's well-known drawing, Prost Noske!--das Proletariat ist entwaffnet! |Here's to Noske!--The proletariat is disarmed!, which appeared on the cover of Die Pleite in early April 1919, was one of several means by which Berlin Dadaists attacked the violence perpetrated by the Freikorps against civilians. The drawing shows an officer, whose helmet bears the insignia of the Reinhard Regiment, proposing a toast to their victory over the proletariat.” From "War, revolution, and the transformation of the German humor magazine, 1914-27." Sherwin Simmons, Art Journal, Spring, 1993.