The Map Collection at Perkins Library and sources for online maps and related information.

We also have information on older maps in the Perkins Library Map Collection.

The sites listed on this page lead to maps that have been scanned in by other institutions and are available on the web, or to information on historic maps.

Library of Congress Map Collections: 1597 -1988
Leads to many scanned images of historical maps in the library's collections in the following categories:

Selected Historic Maps on the Web 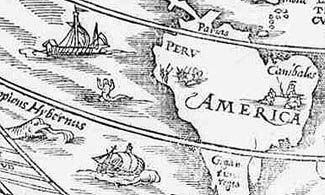 American Geographical Society Digital Map Collection
Over 1600 scanned historic maps from this unit of the University of Wisconsin, Milwaukee. Online viewer or can print a page-sized view, but can only download thumbnails.

Australia: Trove Maps
Maps digitized by the National Library of Australia, covering Australia and the rest of the world.

Britain: John Speed's Theatre of the Empire of Great Britaine
66 proof maps prepared for an atlas dating from the early 1600s. Maps of Counties as well as many detailed city plans.

British Geological Survey (BGS) Maps Portal
High resolution viewing images of almost all small and medium scale maps produced by the British Geological Survey since mapping started in 1832. It includes the key 1:63,360 and1:50,000 maps of England and Wales and of Scotland. To find the sheet number one of these, you need to search the Bookshop http://shop.bgs.ac.uk/Bookshop/ or refer to the index sheet http://shop.bgs.ac.uk/Bookshop/mapIndex.cfm.

Canada at Scale
An exhibit of historic maps of Canada digitized by the National Archives of Canada.

CaribMap
Over 1800 digitized historic maps of the Caribbean area dating from the 16th through the 20th century. Also includes a Resources page linking to other digitized Caribbean maps online.

Disneyland Maps
History of Disneyland through maps, since 1958.

Hargrett Library Rare Book and Manuscript Library, Historical Maps Database
At the University of Georgia. Results will indicate whether a map is available digitally or if you need to visit the library.

Historical Maps of the United States
Scanned at The University of Texas at Austin's Perry-Casteñeda Library Map Collection.  Mostly maps depicting U.S. history that were published in the National Atlas of the United States (1970).  Includes some 19th and early 20th century U.S. Government maps, maps of U.S. National Historic Sites, and many U.S. historical city maps of the same period from the Automobile Blue Book and the U.S. Geological Survey.

Map History / History of Cartography
A thorough guide compiled by Tony Campbell, former Map Librarian at The British Library. Besides the search box, you can enter the site using either the "Sitemap" (broad subject categories) or the "Index" (alphabetical listing of detailed subjects).  Includes the following lists of web sites: Images of Early Maps on the Web and Web Articles and Commentaries on Specific Topics in the History of Cartography.

Office of Coast Survey Historical Map and Chart Collection
Over 200 years of US government charts and maps.

Silkmaps.com
This site contains information on maps printed on silk during World War II by Britain and the United States for easy portability and durability, to be used by troops in escape and evasion. Includes listings and of known silk maps produced by the US Army Air Force (AAF) and by Naval Air Combat Intelligence-Hydrographic Office (NACI-HO). Includes small images of the maps.

Singapore OneSearch Spatial Discovery
Historic maps of Singapore can be viewed in an online interface that overlays them on a modern basemap for context.

State Maps, 1895
From a Rand-McNally Atlas of the World.  From index, click on state to get to a link to these maps (there are also other kinds of maps for each states).

State Maps, 1895
As above, but from a different site.  Allows you to download smaller county-sized maps.

Scroll down to "Compilations of Scanned Maps." Includes historic material from there collection relating to the history of Chicago and Midwestern cities, historic city plans from around the world, 18th and 19th century Europe, and urban rail transit.

Waterloo: History of the war in France and Belgium, in 1815
"Maps and plans are from a folio issued to accompany William Siborne’s standard work on Waterloo.... Each of the four battles depicted—Quatre Bras, Ligny, Waterloo and Wavre—is shown at two or more times of day."

William Smith Materials
Maps, sections and other material from the Library collections of the Geological Society relating to British geologists who compiled the world's first geological map in 1815.