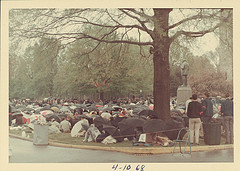 From April 5-11, 1968, Duke University experienced a student-organized demonstration sparked by the assassination of Dr. Martin Luther King, Jr. Following a peaceful occupation of President Douglas Knight's house, students moved to the Chapel Quad, where they kept a silent vigil for several days.

Student activists also called for a boycott of the dining halls, in support of striking food service and housekeeping employees. As a result of the Vigil, the administration agreed to raise the minimum wage for campus employees and re-examine racial concerns.

The Silent Vigil: Getting Started