A guide to the digital collection. 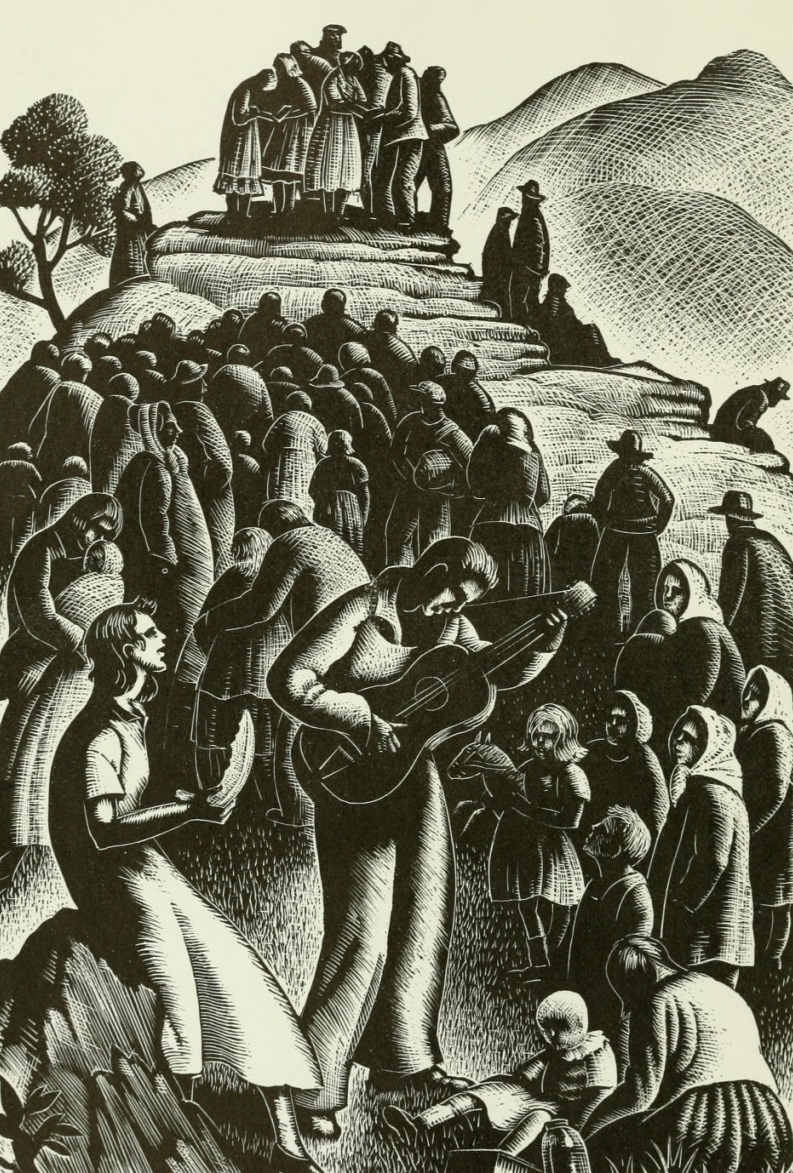 Brown recorded these performances between approximately 1914 and his death in 1943 as part of his lifelong exploration and collecting of North Carolina and Appalachian folk music, ballads, and folklore. An energetic collector throughout his life, even as early as 1926 Brown could write, "I have personally collected songs and other materials on Roanoke Island, and at practically every one of the mountain counties along the Tennessee and Virginia lines." In all, Brown collected songs from at least fifty-two of North Carolina's one hundred counties. Although Brown identified a handful of pieces as songs the singers had learned in other states, he gathered roughly 95 percent of his material in North Carolina. Consequently, the recordings provide a broader perspective on folk traditions and their movement among different populations. The performances include British traditional ballads, American folk songs, music unique to North Carolina, as well as a range of other folk and popular songs from European American and African American musicians. Some 972 of these songs were published in the groundbreaking, seven-volume Frank C. Brown Collection of North Carolina Folklore, compiled posthumously and considered one of the most exhaustive studies of its kind.

Brown began collecting folklore at John Avery Lomax's behest in 1913, following Lomax's call for academics to initiate and energize folk culture collecting in the Southern states. That same impetus led Brown to spearhead the founding of the North Carolina Folklore Society that year, and he was elected the Society's first president. (When the secretary-treasurer-elect complained about his own position, however, Brown exchanged offices with him. Brown remained the Society's secretary-treasurer until his death in 1943.)

Over the course of his career, Brown worked with many significant folklorists. In addition to John Avery Lomax, Brown considered Maude Minish Sutton, an active and widely-respected collector of North Carolina folk songs and ballads, a highly-valued co-worker. Although Sutton died in 1936, she contributed transcripts for more than one hundred songs to what became the published, seven-volume set. Other contributors to those volumes include Frank Warner, one of Brown's students who, with his wife Anne, collected many previously unpublished folk songs and ballads; W. Amos Abrams, whose collection of field recordings is at Appalachian State University; and playwright Paul Green and his wife Elizabeth. Nevertheless, despite the deep collaboration demonstrated by those volumes, all of these recordings appear to have been collected by Brown himself.

The Frank Clyde Brown Collection contains three separate audio recording formats. By 1919, he had bought an Ediphone dictation phonograph, which used wax cylinders as the recording medium. That Ediphone is housed with the Rubenstein Library's Frank Clyde Brown papers. Brown used the Ediphone until 1939, when the Duke University Research Council granted Brown $295 to purchase a Presto Recording Machine, a gasoline-powered 12-volt electric generator, a battery, and "a converter, which changes the 12V. D. C. current into one at 110 A. C." Brown recorded the fifty-one aluminum lacquer (acetate) phonodiscs using the Presto recorder. And in 1936, prior to purchasing the Presto recorder, Brown wrote Maude Minish Sutton that he was waiting for a visit from John A. Lomax, and that the two of them would be recording to Lomax’s “expensive” aluminum disc machine. The twenty-five aluminum discs in the collection were therefore very likely recorded on Lomax's equipment.

It is important to note that not all songs in the seven-volume set are represented in these recordings. As noted above, Brown received some song transcriptions as contributions from other members of the North Carolina Folklore Society. And in keeping with contemporary practice, after he transcribed songs from his Ediphone recordings, Brown sometimes shaved the cylinders' wax surface layer so he could reuse the cylinders. This, and his replaying of other recordings for students and folklorists, undoubtedly led to the poor audio quality of some recordings.

A note on collection organization

While several inventories of the wax cylinders and phonodiscs were created through the years, it doesn't appear that Frank Clyde Brown brought any overarching order to the collection, by recording date, performer, or song, and the relationships and order imposed by Newman Ivey White and the editors of the Frank C. Brown Collection of North Carolina Folklore following Brown's death served a logic particular to that project.  Additionally, because of Brown's practice of shaving the wax cylinders for reuse, and because the editors were dealing with both Brown's original media and copies made by the Library of Congress, the numbering systems used to identify the media can be deceiving to the point that these legacy systems only further muddle efforts to bring intellectual control to the collection.  When discussions of digitization and grant proposals began in earnest in 2014, we recognized that until we had digital copies of the media made, we would not be able to determine, with any degree of accuracy, the contents of a cylinder or disc, but once we did have a digital surrogate, we could use the old inventories as well as the North Carolina Folklore volumes to identify the content, performer(s), and date of each recorded piece.  When the collection was rehoused in 2014-2015 in preparation for the grant proposal process, library identifiers were given to the media based on the collection number and format type, plus a sequential number that acts only to make the identifier unique, not to suggest a sequence employed by Brown or subsequent scholars.  Wax cylinders therefore have numbers beginning "RL00160-WC-0001," etc., phonodiscs have numbers beginning "RL00160-PD-0001," etc.  Once the identifiers were in place (attached to the sleeves and boxes housing the discs and cylinders), the items could be digitized, with the resulting filenames reflecting these numbers, so that content could at last be matched to the original media.  When description began using the digital files returned by the Northeast Document Conservation Center, clips of individual tracks were exported from the original files, so that the collection could be searched both by overall object and by track.  These clipped files have numbers appended to them to indicate their sequence on the cylinder or disc, so for example, RL00160-WC-0002_01, _02, _03, etc. (and, since phonodiscs have two sides, the first appended number indicates side, and the second the track, for example, RL00160-PD-0001_02_01, _02, _03, etc.).  It should be noted that despite our best efforts in identifying tracks, audio quality as well as early efforts at cataloging the collection -- again, complicated by Brown's practice of shaving cylinders -- means that some files may be misidentified.  As the collection gets use, we hope to correct any mistakes in identification made in the digitization of the collection.

To digitize the fragile recordings, the Northeast Document Conservation Center (NEDCC) created the digital files using IRENE technology, developed by Carl Faber and Earl Cornell at Lawrence Berkeley National Laboratory. IRENE (Image, Reconstruct, Erase Noise, Etc.) scans the recordings' grooves optically rather than through physical contact with a stylus, which could cause further damage to the media.  The resulting TIFF image files were processed using IRENE’s Weaver software to generate preservation standard audio files.  The audio files presented in this digital collection were derived from the preservation files and have had some equalization applied, to enhance listenability.

"All Day Singing: Digitizing Recordings in the Frank Clyde Brown Collection," a grant to digitize and describe the extant original recordings in the Frank Clyde Brown Papers, was awarded to Duke Libraries by CLIR/Mellon in 2015 as part of their Digitizing Hidden Collections program.  Winston Atkins, the Libraries' Preservation Officer, was the grant project's principal investigator.  Craig Breaden, Audiovisual Archivist at the Rubenstein Rare Book & Manuscript Library, managed the technical and descriptive elements of the project.  Phillip MacDonald, project intern, described the recordings, performed copyright assessment, and where possible traced descendants of performers.  The team who produced the repository-based website for the collection was led by Molly Bragg, Head, Digital Collections, and included Maggie Dickson, Metadata Architect, Moira Downey, Digital Repository Content Analyst, and Sean Aery, Digital Projects Developer.  This library guide was produced by Craig Breaden, Winston Atkins, and Phillip MacDonald, and was published along with the digital collection in November 2018.