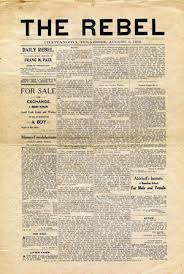 These databases are restricted to Duke users except for Chronicling America.

America's Historical Newspapers (1690 to 1922) provides access to scanned images from newspapers from all 50 U.S. states.

Newspapers.com provides access to articles from thousands of newspapers from the 1700s -2000s.

19th Century US Newspapers provides access to approximately 500 U.S. newspapers, published between 1800 and 1900.

African American Newspapers: The 19th Century provides the full text of articles from the following newspapers: Freedom's Journal, The Colored American, The North Star, The National Era, Provincial Freeman, Frederick Douglass Paper, and The Christian Recorder. Coverage begins in 1827 but varies by title.

African-American Newspapers (1827-1998) provides full-text access to over 350 newspapers from more than 35 states.

Chronicling America is a joint project of the Library of Congress and the National Endowment for the Humanities.  Currently, you can search and view pages from the newspapers of around 30 states. The ultimate goal of this project is to have every state and U.S. territory represented in this digital archive.  Coverage is 1836 to 1922 but varies by title.newspapers, magazines, and journals published in the United States.

Where else can I look?

Beyond our online resources, The Duke University Libraries has newspaper titles in both microform and print. The Rubenstein Rare Book & Manuscript Library is home to the American Newspaper Respository which dates from 1852 through 2004 and consists of approximately six thousand bound newspaper volumes and more than 11,000 unbound newspaper items, most of which came, directly or indirectly, from the British Library.

We also have newspaper holdings (primarily on microfilm) in our general collection.  Search Books and Media (online catalog) for possibilities.  Search strategies: perform a keyword search on the term newspapers combined with a geographic location to get newspapers from that area -- for example, newspapers charleston s.c.