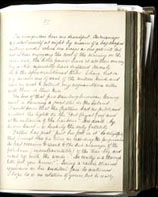 John Backhouse Papers, 1740-1956
London, England. Large collection of family papers include the papers of George Backhouse, who was a Commissary Judge at Havana in the 1850s as a part of an Anglo-Spanish commission that handles cases involving the suppression of the slave trade. Letters and diaries of Backhouse and his wife include references to the slave trade and give a description of the Backhouses' daily lives in Havana. Other family correspondence includes letters among the women in the family as well as estate settlements and inventories which involve these women.

Samuel Smith Downey Papers, 1762-1965; (bulk 1800-1900)
Granville County, NC. The papers of Samuel S. Downey concern his administration of the estate of John G. Smith and the many suits involving the estate, the management of plantations in Mississippi and North Carolina including correspondence and legal papers dealing with hiring slaves, and a record book of slave births and deaths. The record book (1828-1874) occasionally notes the cause of death and the number of children born to each mother.

David Bullock Harris Papers, 1789-1894
Frederickshall, VA. Business and family papers of a tobacco exporter and confederate general includes anonymous diary (1854-1867) of a female family member which records her feelings and change of lifestyle after her husband of 20 years deserted her.

Munford-Ellis Family Papers, 1777-1942
Richmond and Lynchburg, VA. Letters of the women in an extended Virginia family contain information of the details of household economy and general social conditions. A scrapbook, 1861-1871, of Lizzie Ellis Munford contains Confederate verse and momentoes. Letters of Margaret Nimmo Ellis span from 1840-1877 and contain accounts of war activities and social changes resulting from the Civil War.

Person Family Papers, 1754-1971 and undated; (bulk 1829-1897)
Louisburg, NC. This collection includes letters from Harriet Person Perry who was in Texas during the Civil War; letters from various family members while attending Raleigh Female Classical Institute in 1835 and the Warrenton Female Academy in 1860; and an 1869 diary of Harriet Perry.

John Rutherfoord Papers, 1754-1931; (bulk 1781-1855)
Richmond, VA. Family, business, personal, and political correspondence of Rutherfoord, who was governor of Virginia, and his family. Includes domestic letters of the women in the family including Jane Rutherfoord Meade, Sarah Coles Stevenson, and especially Anne Seddon Roy Rutherfoord (courtship letters and letters among family and friends discussing treatment of and loyalty to slaves and hardships during the war).

Sir James Carmichael Smyth Papers, 1785-1952
Nutwood, Surrey, England. Papers of a British army officer and governor of the Bahamas (1825-1833) include the diary of Lady Carmichael-Smyth which records her activities and life in the Bahamas. Collection also includes latter diaries (through the 1860s) and a memoir (55 pp.) which focuses on the Lady's life through 1810.

Tillinghast Family Papers, 1763-1971
Fayetteville, NC. Large collection of family papers include the 1861 journal of Emily Tillinghast, which describes homelife during the early months of the Confederacy. A long letter (56 p.) of Sarah Ann Tillinghast describes making clothes for the local infantry. An account by Robina Tillinghast gives her reaction to Sherman's march through Fayetteville. Papers prior to 1850 document the lives of Jane Norwood and Robina Norwood, both wives of Samuel Tillinghast. Papers after 1900 are primarily those of Anne Wetmore Tillinghast and her daughter and pertain to public schools and education in NC and nursing with the American Expeditionary Forces in Europe during WWI.

George W. West Papers, 1785-1910
Polk Co., GA. Letters of Josephine West and her friends concern social life just before the Civil War and the difficulties of managing slaves during the Civil War.