Since 2000, Duke University Libraries have been building and expanding their Middle East and Islamic Studies collection. While collecting comprehensively in all subject areas in English, the collections in the three main regional languages, Arabic, Persian, modern Turkish/Ottoman Turkish, as well as Urdu, (for Hebrew, see the collection description on the Jewish Studies guide) center on the humanities and social sciences, with a particular focus on materials on Islam (jurisprudence, law, exegesis, theology), Arabic language (grammar) and literature (both classical and modern), as well as history (history of Islam, contemporary history) and politics. Duke faculty’s interests, curricular and programmatic development, and the Libraries’ consortial responsibilities towards their partners within the framework of the Triangle Research Library Network (TRLN) form the basis for Duke’s strong holdings in Arabic and Turkish. The figures in the table below are from 2018.

The Duke and UNC Middle East and Islamic Studies librarians are cooperating in building collections in Middle East area studies. Collection responsibilities are delimited by language and region. Both institutions collect Arabic materials from the Arab Middle East as well as North Africa and materials in French from North Africa. Duke collects at research collection level in Turkish, UNC in Persian.

The David M. Rubenstein Rare Book & Manuscript Library houses several collections and unique items of interest to Middle East and Islamic Studies. Highlights include, but are not limited to:

Collection of Ottoman Turkish Periodicals
This collection includes periodocals from a wide variet of subject areas, including, but not limited to, popular culture, Islam, government publications, education, health, cartoons and caricature, and art.

Ethiopian Qur'an Manuscript - c. 1700
Typical of Harari work, and of a quality not matched elsewhere in sub-Saharan Africa, is the exceptionally fine leather binding. Both the distinctive large, curved script and zig-zagging marginal commentary are strongly reminiscent of the so-called ‘Bihari’ Indian Qura’ns of 15th century, raising questions concerning cultural transfer between India, South Arabia and the East African coast.

Holmes, Randolph Bezant, 1888-1973.
R. B. Holmes photographs, 1910-1919 and undated.
Rubenstein Library Library Service Center Fully Processed: Box 1-3
Finding Aid/Guide
Check availability @ Duke
Collection of ninety-two 11.5 x 9.5" black-and-white photographic prints of Afghanistan, India, and Pakistan. The images were taken by British photographer R. B. (Randolph Bezzant) Holmes and possibly others from his studio who traveled with him. Holmes was the owner of the R. B. Holmes & Co. photography studio in Peshawar, Pakistan. The majority of these detailed images were taken during the end of the Anglo-Afghan war in 1919 and depict large British military camps and vast landscapes, sometimes with camel caravans or military convoys. Some scenes show the remains of villages, military features such as towers, and religious structures. There are also portraits of individuals along with scenic views. Several of the images have been hand-tinted, probably by Holmes himself.

Jewett, Milo A. (Milo Augustus), 1857-1921.
Milo A. Jewett albumen photographs of northern Turkey, 1891-1894 and undated.
Rubenstein Library - Library Service Center Fully Processed: Box 1 Check availability @ Duke
Summary: Physician, amateur photographer, and American consul in Turkey (Sivas, 1892-1905 and Trebizond, 1905-1911).
Collection comprises 19 images of various locations in the northern provinces, including 18 mounted albumen photographs probably taken by Jewett, along with one published view of Sivas attributed to Franklin Eng Co, Boston. All but one of the images is captioned, and several photographs an additional information written on the back of the mount. Ten of the photographs were taken in Sivas; other locations identified include the Kızıl Irmak River, Tokat Plain, and Divaik[?]. Two of the photographs document the quarantine camps established during a cholera outbreak in 1894. Other subjects include housing conditions, street life, and the Seljuk Gateway and ruin. There are individual photographs of groups of people, including Armenian Christian women returning from a prayer meeting, a father and his daughters, a graduating class of local teachers, and attendees at a hanging of a murderer. A boxlist listing the photographs and their captions is stored with the materials.

Sebah & Joaillier.
Panorama de Constantinople : pris de la tour de Galata
ca. 1878-ca. 1890.
Rubenstein Library E f#1559 Rare Books Check availability @ Duke
Summary: Panoramic vista of Constantinople in an accordion-fold format encompassing approx. 270 degrees, taken from the Galata Tower looking across the quarter of Galata towards the Tophane district and the Bosporus beyond, then to the outer Golden Horn harbor and the tip of the Istanbul peninsula with the Palace of Topkapi, then sweeping across the city inland along the Golden Horn waterfront towards the district of Eyüp.
Sykes, Sir Percy.
Photographs taken by Lt. Col. Sir Percy Sykes to illustrate Chinese Turkestan, the Russian Pamirs and Osh April-November, 1915
Summary
Bound photograph album containing 48 photographs taken by Sir Percy Moleworth Sykes during his travels in a mountainous region of Central Asia, now the Xinjiang Uyghur Autonomous Region of China, with his sister, Ella Sykes. The gelatin silver prints measure approximately 4 1/2 x 6 3/4 inches and are window-mounted two to a page with calligraphic captions in white ink. Subjects include landscapes, strategic buildings such as forts and trading posts, and local Uighur, Beg, Kyrgyz, and Kazak people and their dwellings and animals, as well as British, Russian, Turkish, and Chinese people and officials. Specific locations in captions include Kashgar, the Tuman River, Yarkand, Khotan, Merkit, Bulunkul, the Pamirs, Tashkurgan, Muztagh Ata, Karakul lake, Tian Shan mountains, and Osh. The images are large, crisp, and rich with detail, offering views of a remote area and its culture during tensions in the decades following the Russo-Turkish War.
Rubenstein Library: Reading Room only Check availability @ Duke

In Duke's History of Medicine Collection 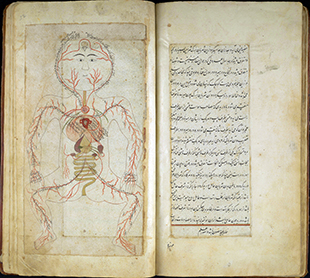