Search for "Israel" as a subject heading in order to find many related published works, and narrow your search using additional related search subjects that arise.

We have recently processed a very large collection of print materials related to the German Jewish experience; search for "German Jewish" as a subject heading in order to find many related published works, and narrow your search using additional related search subjects that arise.

Search for "Zionism" as a subject heading in order to find many related published works, and narrow your search using additional related search subjects that arise. 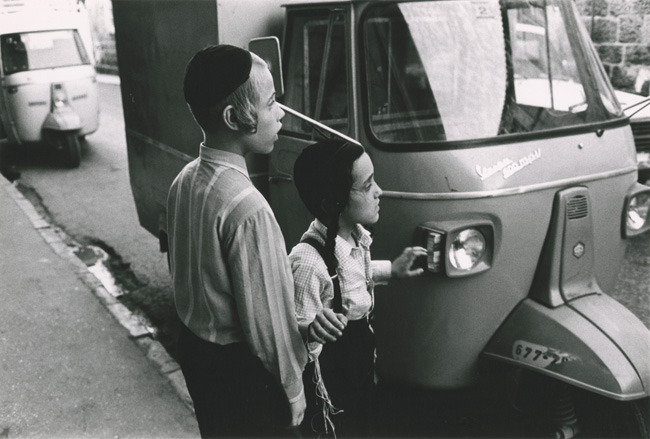 A handful of photographs in our collection of Ronald Reis photographs depict life in Jerusalem in the 1970's.

Israel and the Diaspora ephemera collection, 1918-2004: This collection contains serial and short-run periodicals published by secular Jewish organizations and governmental agencies in Israel and around the world. The materials range in date from 1918 to 2004, and document a variety of subjects including history, literature, the Holocaust, secular Jewish education, and social-cultural issues.

The Jewish Orthodox Publication collection, 1914-2004 documents Jewish Orthodoxy in its various manifestations through ephemeral publications created and distributed by Orthodox Jewish groups in Israel, the United States, and around the world. The materials range in date from 1914-2004, with the bulk of  the material published between 1950-1995.

Marshall T. Meyer Papers, 1902-2004 and undated, bulk 1984-1993:  Marshall T. Meyer was an activist rabbi who worked in Argentina during the period of the Dirty War (mid 1970s to mid 1980s). The collection includes personal and professional correspondence from throughout Meyer's career as a religious leader and human rights activist; his published and unpublished writings and speeches; printed material; and personal files, among other items.

Palestinian and Lebanese Poster Collection, 1960-1991 [bulk 1965-1979]: Posters and some brochures and pamphlets acquired by Bill Tracy during his time at the American University of Beirut. The Palestinian posters attempt to raise awareness of the plight of the Palestinian people while simultaneously incriminating Israeli and American politics and violence. Several posters insinuate and accuse the United States and Israel of murder and genocide. Many are from the Palestinian National Liberation Movement organization, also known as FATEH or FATAH, showing Palestinian freedom fighters, injured children, paintings of guns raised, and other images encouraging Palestinian resistance. Another organization represented is the Popular Front for the Liberation of Palestine (PFLP), which has similar themes of militantism against Israel and unity among Palestinians.

General Resources at Duke and Beyond

Visit the Jewish Diaspora section of the Jewish Studies LibGuide for information on diverse topics including: