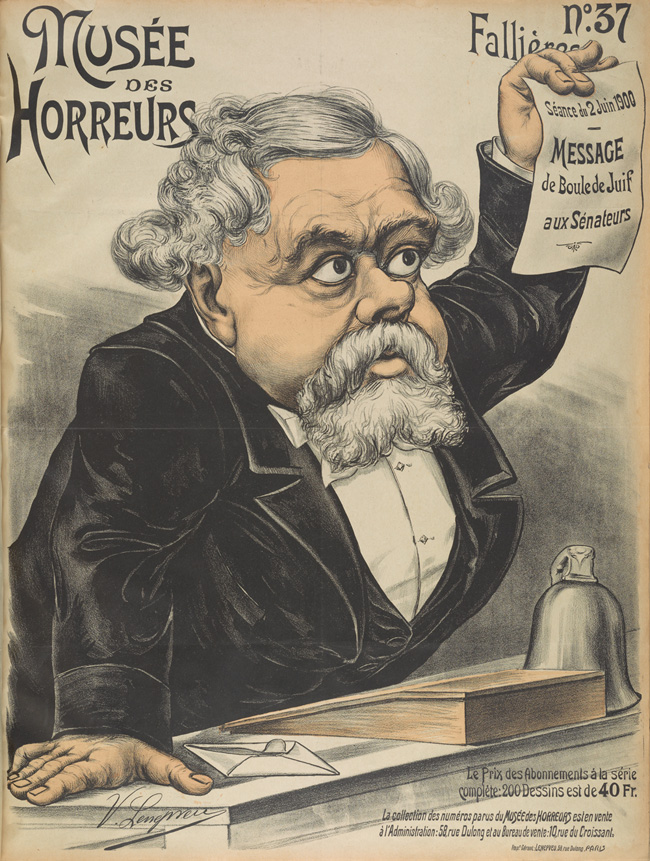 Holocaust Poster Exhibition Series in the German Broadsides Collection: Consists of two sets of large black-and-white and color posters produced in the 1990s by the Anti-Defamation League of B'nai B'rith and the United States Holocaust Memorial Council.

Musee des Horreurs: This digital collection contains a complete set of 52 hand-colored lithographs published as Musée des Horreurs, and three hand-colored lithographs published as Musée des Patriotes. The lithographs feature caricatures of various individuals involved in the Dreyfus Affair in France. The posters were originally produced from 1899 to 1900 by an artist using the pseudonym V. Lenepveu and document the anti-Semitic upsurge brought about by the Dreyfus Affair at the turn of the twentieth century. The listing for our physical copies is here.

Take a look through sections on the Holocaust and on antisemitism in the Jewish Studies LibGuide for many more resources at Duke and beyond.

Deutscher kampf, [1929?]: Collection of programs of music, songs and speeches as well as the text of speeches, recitations, poetry and quotations from books apparently prepared for the Albert Forster School in Berlin during the Nazi period. Topics include soldiers, workers and peasants, Adolf Hitler, World War I, and the struggle for victory.

Floyd Millard Riddick papers: Box CS-1 contains a series of letters from a young Jewish woman who wanted Riddick to assist her in obtaining admission to the United States as a student and reflects rising antisemtic rhetoric in Germany near the end of the 1930s.  Box MP-1 contains the original diary that Riddick kept during his visit to Germany in 1937-38. The diary and accompanying transcript describe many incidents of anti-Semitic speech and actions.

Southern Poverty Law Center Intelligence Project collection, 1940-2010:  It contains antisemitic and other hate literature collected by the SPLC, including the periodical Jew Watch. Portions of the collection are currently closed pending processing.

Lenora Greenbaum Ucko papers, 1966-1998: Box 9 contains slides, photographs, oral histories on audiocassettes, 1 VHS videotape, printed and other materials all concerning a 1996 exhibit Lenora Ucko curated in honor of her late husband, Henry Zvi Ucko. The exhibit was entitled "What We Brought with Us" , an exhibit about the personal items taken by German Jews who fled Nazi Germany in the 1930s. The exhibit was first at Duke University and then moved to the NC Museum of History in Raleigh.

Find printed material related to B'Nai B'rith by searching the Rubenstein Library's catalogue for B'Nai B'rith in the subject heading or author fields.

Byliśmy w Oświęcimiu (We Were in Auschwitz): Memoirs written by three former prisoners of Auschwitz, Janusz Nel Siedlecki, Krystyn Olszewski, and Tadeusz Borowski. This edition is bound with material cut from a prisoner's uniform.

La Libre Parole was an antisemitic French newspaper founded in 1892 by Edouard Drumont. See here and here in our catalogue for holdings of this newspaper at the Rubenstein.

Nazi Propaganda and Ephemera Series, 1930s-1943, in the German Newspaper Clippings Collection, 1900-1943: Domestic and international Nazi propaganda, including certificates, letterhead, a newspaper clipping, and a Nazi-produced newsletter for America. Also includes 85 pro-Nazi articles, most of unknown origin, in English (possibly translated from German), on various topics, apparently from the 1930s-early 1940s.

Protocols of the meetings of the learned elders of Zion: A work first published in Russia in the early 1900s that claimed to describe a Jewish plan for global domination.

A short and easie method with the Jews : wherein the certainty of the Christian religion is demonstrated by infallible proof from the four rules made use of against the Deists : shewing, that these four rules do oblige the Jews, as much or more than the Deists, to the acknowledgment of Christ : with an answer to the most material of their objections and prejudices against Christianity. Author: Leslie, Charles, 1650-1722.

To identify Rubenstein print or manuscript material on these topics, search the catalog using subject headings such as these:

And then refine your search by consulting additional subjects as listed with your search results. Alternatively, use keyword searches to find relevant sources and use the subject headings used to identify additional material.