ArcMap Desktop Introduction: What is ArcGIS?

ArcGIS® is a desktop mapping and spatial data analysis application produced by Esri (formerly, Environmental Systems Research Institute, Inc.).  It allows you to create your own maps from scratch starting with geographic data in electronic form and to analyze data that has a locational component. There are also a number of extension applications for specialized analysis.

It is a complex program, so this guide will give a skeletal description of it and will point you in the right directions for more help. Users should be familiar with Microsoft Windows®.  Facility with a spreadsheet or statistical package is also useful for cleaning up tabular data or for analyzing it further after exporting from ArcGIS. 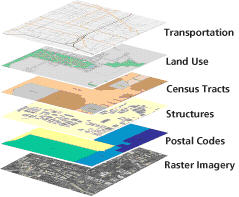 ArcGIS uses the concept of a Geographic Information System (GIS) to build maps in which each category of spatial feature is a separate layer. The layers are spatially "registered" so when the user overlays them the program can line them up correctly  to build a map. There are several types of layers, and the user has many choices regarding how to depict them.  The first three listed are called "vector layers" or "feature layers" and contain individual features that the program can distinguish.

Data can be associated with the spatial features, and mapped or analyzed:

The program can also map spatially referenced data files in some spreadsheet and database formats (e.g, if one field contains latitude/longitude coordinates).  Tables that contain address data can be "geocoded" to map the locations based on a street layer.  Users can open a non-registered raster image and georeference it using the program's functions, or vectorize features from a raster image.

You can also add your own information to a map with drawing and writing tools.