The links below will bring up catalog listings of all books in these two gay male pulp collections (some overlap between lists). Additional titles may be found through the online catalog. Try browsing subject headings such as "Gay men - Fiction."

The Carl V. Corley Papers contain the writings, drawings, scrapbooks, notebooks, and published materials that document the career and artistic output of this novelist and illustrator who published twenty-two works of gay male pulp fiction. The collection also includes typescripsts and manuscripts of published and unpublished works of gay fiction, southern history, and heterosexual erotica, some of which is in the form of comic books or graphic novels. 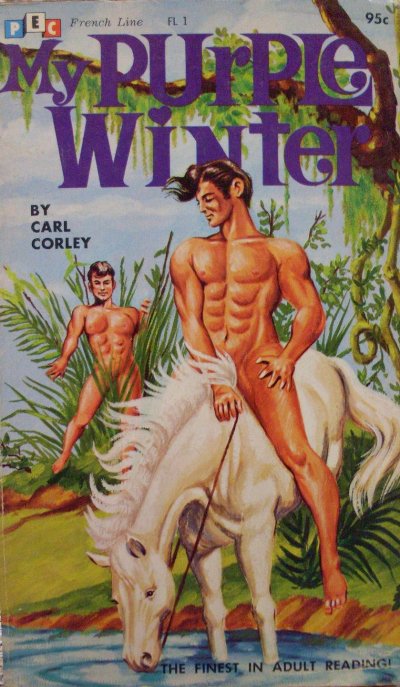 "They are an integral aspect of gay male culture and gay history that is as vital as—indeed inseparable from—our fight for legal equality and personal freedom. They are the records—albeit fictional ones, often seen through the peculiar lenses of their times—of how gay men lived, thought, desired, loved and survived."

In November 2005, the Bingham Center received an initial donation of 378 gay male mysteries and police stories and 109 gay American pulps generously given by Drewey Wayne Gunn, Professor Emeritus, Texas A&M University-Kingsville. Gunn is the definitive collector of gay male mysteries and wrote the 2005 book The Gay Male Sleuth in Print and Film: A History and Annotated Bibliography.

Gunn first discovered gay paperbacks at convenience stores in the small Texas town where he lived during the 1960s. After retirement, Gunn began his research into the gay male mystery and pulp fiction genres. Gunn is also the author of several articles and other books including Mexico in American and British Letters (Scarecrow, 1974) and Tennessee Williams (Scarecrow, 1980; 2nd ed., 1991).

In the late 1950s through the mid 1960s, U.S. Supreme Court rulings challenged the censorship and custom laws used to levy "obscenity" charges against books with controversial themes. In the wake of these legal victories and with the flourishing of the homophile movement, there was an explosion of gay "pulp" fiction publishing.

Besides serving as a "validation of gay male sexual desires" (Bronski, 2001, p.20), these books, written primarily by gay men, offered readers insights into how gay men lived. They served as primers on gay cultural norms for newly coming out or isolated gay men. At first, these gay-themed books did not acknowledge the possibility of a "gay life," just "gay sex," but as gay culture and politics

In an effort to pass the Supreme Court's new standards, introductions in a number of these books discuss how that particular novel fits within the historical context of homosexuality and why the title is a necessary step in dismantling "sexual repression." There are currently 109 titles in our gay American pulps collection which has been supplemented with the purchase of 58 additional gay male pulps.

By the 1980s and 1990s, as gay culture entered into the mainstream, gay-themed novels were printed by prominent publishing houses. The novels' themes expanded, too, not only focusing on sex, but also expanding into literary and genre fiction. The Drewey Wayne Gunn Collection of Gay Male Mysteries and Police Stories currently consists of 378 books ranging from mainstream hardbacks to Japanese manga to the specialized publisher, "adult only" titles.

The publishing world has evolved to the extent that some of the writers represented in this collection aren't classified as "gay writers." Examples of well-known authors whose books are in this collection include: Paul Monette, Joe R. Lansdale, Mark Dunn, Julian Barnes (writing as "Dan Kavanaugh"), Poppy Z. Brite, Larry Townsend, and Robert B. Parker.