America's Historical Newspapers (1690 to 1922) provides access to scanned images from newspapers from all 50 U.S. states.

19th Century US Newspapers provides access to approximately 500 U.S. newspapers, published between 1800 and 1900.

Japanese-American Relocation Camp Newspapers is a collection of 25 newspapers which document life in the camps.

Chronicling America is a joint project of the Library of Congress and the National Endowment for the Humanities.  Currently, you can search and view pages from the newspapers of around 30 states. The ultimate goal of this project is to have every state and U.S. territory represented in this digital archive.  Coverage is 1836 to 1922 but varies by title.

America's Newspapers is a large collection of titles arranged by state and region. This full-text service excludes advertisements but includes national, regional, state, and local news items which were written by the local newspaper staff. Letters to the editor and editorials are included. Coverage is largely from the 1990s to present.

LexisNexis Academic provides full text access to a wide range of U.S. newspapers, radio and television transcripts. Coverage varies by title, but the majority of titles are available from the 1990s to the present.

Ethnic Newswatch (1960 to present) contains the full text of articles, editorials, and reviews published in nearly 200 ethnic and minority newspapers, magazines, and journals published in the United States. 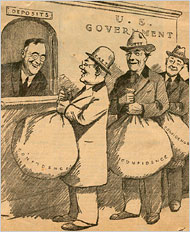