For the Behind the Veil Oral History Project  teams of researchers conducted oral history interviews with more than one thousand elderly black southerners who remembered the period of legal segregation, including many from Durham, NC and surrounding areas in North Carolina. Many interviews have been digitized and are availble online.  310 of the digitized interviews are with North Carolinians, including 44 with Durham residents.

Rencher Nicholas Harris (1900-1965) was an African American businessman and civic leader of Durham, N.C. Harris was the first African American city councilman in Durham, N.C., and the first black man to sit on the Durham County Board of Education. The collection consists mainly of materials relating to Harris' work in political and educational affairs in Durham in the 1950s and early 1960s as a member of the Durham City Council and the Durham School Board; his career in banking, insurance, and real estate as an official of the Bankers' Fire Insurance Company; and his civic activities.

Asa T. Spaulding was an insurance executive in Durham, N.C. and an activist in civil rights, education, employment, and other work related to minorities' rights. He held various positions in the North Carolina Mutual Life Insurance Company for almost thirty-five years. Elna Bridgeforth Spaulding was an activist in civil rights for minorities and women and involved in local politics in Durham, N.C, serving as a Durham County Commissioner for five terms, from 1974 through 1984. The Spauldings were active in a broad range of political bodies, businesses, civic groups, and activist organizations

Helen G. Edmonds (1911-1995) was a noted educator, historian and administrator. She was active in numerous civic and social organizations and was a stalwart in the Republican Party. The correspondence, speeches and programs in the collection provide insight into her work as a teacher and scholar. The bulk of the collection, however, documents her work with the National Republican Party and appointments in the Department of State, in the Department of Defense, on the National Advisory Council of the Peace Corps, and as a U.S. delegate to the United Nations.

Lincoln Hospital was a Durham hospital established in 1901 by Dr. Aaron Moore, Dr. Stanford Warren and John Merrick to serve African Americans in the area. The Lincoln Hospital Records primarily comprise the institution's administrative and medical files. The collection as a whole documents the bi-racial cooperation that was involved in establishing, running, and maintaining the institution, and outlines the collaboration between Lincoln Hospital, Watts Hospital, and the Duke University School of Medicine in providing patient care as well as education for African American medical professionals.

William Gaston Pearson was a Durham, African American businessman, civic leader, educator and philanthropist. The collection includes a scrapbook of clippings and printed materials that reflect the business accomplishments and life of Pearson, who founded the North Carolina Mutual Life Insurance Co., the Mechanics and Farmers Bank, the Durham Drug Co. and other businesses in Durham, primarily in banking, credit and insurance.

Women-In-Action for the Prevention of Violence and Its Causes, Inc. Durham Chapter Records (includes digitized content)

Women-in-Action for the Prevention of Violence and its Causes is a non-profit, inter-racial organization founded in Durham, N.C. in September 1968. Elna Spaulding was founder and first president. The collection documents the organization's involvement in the Durham community on a variety of issues, including easing racial tensions; smoothing the way for court ordered school integration in 1970; providing for the recreational and cultural needs of disadvantaged youth; and establishing a clearinghouse to offer information and referral services to Durham citizens for a variety of social problems.

The collection features correspondence, legal and financial papers and photographs that document the personal relationships and professional activities of Fannie B. Rosser, a successful African American businesswoman. The correspondence series pertains to Rosser's business ventures in management of rental property in Lynchburg, Va., and Durham, N.C.; personal loans made to family and friends during the Depression; and investments in government stocks and bonds.

Earl Thorpe, a resident of Durham, was a historian, professor, clergyman, and activist. Primarily, materials in the collection address Thorpe's work at North Carolina Central University (formerly North Carolina College), and his tenure as visiting professor at Harvard and Duke universities. Topics include student activism, teaching, racial and departmental politics on campus, and the development of viable African American Studies programs. Some materials also touch on North Carolina and Durham politics and race relations.

The North Carolina Mutual Life Insurance Company was founded in Durham, N.C. in 1898 and is the oldest currently active African American-owned insurance company in the United States.This collection documents the founding and development of N.C. Mutual in Durham, N.C., and contributes to the historic record on African American businesses and entrepreneurship in the South and in the United States. Dating from 1850 to 2008, with the majority of the items dating from 1898 to 2008, the material covers nearly every aspect of N.C. Mutual's operations, management, and milestones. A small selection of images from the NC Mutual Life Archives is available online.

Youth Document Durham and Durham Works were programs sponsored by Duke University and the Center for Documentary Studies that brought together young people ages 12–16 from diverse Durham communities to document their lives, local history and contemporary social issues through photography, oral history and narrative writing.

Oliver B. Quick. Milestones Along the Color Line: A  Souvenir of Durham, N.C., Showing the Progress of a Race., 1922.  (Digitized)
Created by Quick to show "property owned and controlled exclusively by Negroes in the City of Durham, N.C. [...] as evidence of the progress being made by our race group in this section of the South." Includes photographs of hotels, theatres,  and other businesses, as well as schools, churches, and private homes.

Negro Directory of Raleigh, Franklinton, Durham, Henderson, [1922?]
Directory lists addresses of black-owned businesses and black citizens in Durham and other nearby cities. 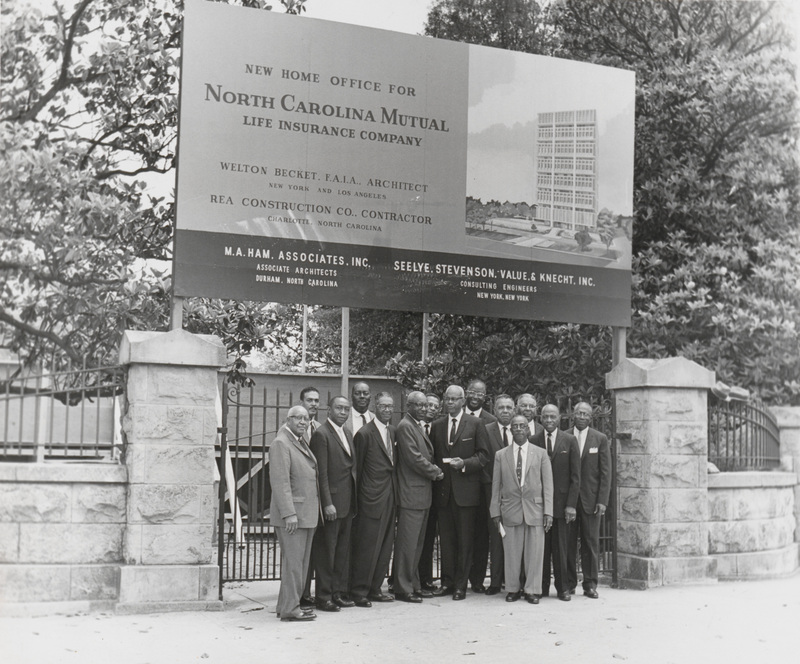