Most of our lesbian pulp fictions can be found through searching for the "Lesbian Pulp Fiction" subject heading in our library catalog. This list of selected titles highlights a few important titles and themes.

Anne Bannon is probably the best-known of the lesbian pulp authors; her Beebo Brinker is a legendary butch. The lives of her major characters intertwine and carry over from one novel to the next. The novels definitely contribute to one "umbrella" story about Beebo, Laura, and the other inhabitants of Greenwich Village, but weren't written in order. The "chronological" order of the novels in regard to the story (which spans-approximately-a decade) is: Beebo Brinker; Odd Girl Out; I Am a Woman; Women in the Shadows; and Journey to a Woman. Bannon creates fully-developed characters and real story lines, rather than the more sensationalist pulps that often used flimsy stories as bare framework upon which to hang sexual exploits (which is not to say that Bannon's books aren't sexy!). Once Bannon's characters find the Village, they never want to leave.

The books in the "Erika Frohmann Series" were not published in an order matched to the story's timeline. Return to Lesbos takes place within a year of World without Men, and gives the impression that Kate had died in a serious accident, which is odd since Kate was quite healthy at the end of her hospital stay in World. Stranger on Lesbos (1960) comes between World and Return yet it was the first volume to see publication.

Women in the Shadows: An Introduction 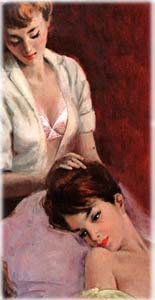 "Come here, Laura." She looked unearthly as she spoke, with her black hair tumbled, her cheeks crimson. ...They stood motionless, so close that they touched. ...Laura shook all over. She couldn't talk except to repeat the other girl's name over and over, as if she were in a trance...Neither of them heard the phone ring, felt the chill of the rainy night, knew of anything except each other.

So reads a passage from Ann Bannon's I Am a Woman, one of scores of pulp novels about lesbian love and sex published during the paperback industry's most sensational era. In 1950, twelve years after Pocket Books published the first mass-market paperback, Fawcett began to feature the twilight world of women-loving women with its successful Gold Medal imprint series. Other publishers followed suit; soon the genre was so firmly established that readers could choose among several formulas or subgenres of lesbian pulp fiction: lesbians in institutions, love triangles, lesbians "saved" by straight men, etc. With their camp cover art and lurid prose, many of these books appealed to readers across lines of gender and sexuality, desires and tastes; although the narratives undoubtedly satisfied the prurient interests of many straight readers, they also catered to an entire generation of lesbian readers, who were anxious to find a reflection-albeit distorted and often cruel-of their own lives in a work of fiction.

Lesbian pulps were titled and pictured in "codes" that helped lesbians pick them out from amongst a drugstore rack filled with similar, often lurid, titles: a cover with a brunette towering over a reclining blonde, often with a man in the far background; titles with "strange", "odd" or "shadows" in them. The pulps gave some women a glimpse into a world that wasn't easy to access outside of large cities. The popularity of the pulps made them available to women across the country, providing some sense of comfort and inclusion. However, lesbian characters rarely fared well in these novels, their potential for happiness ruined by censure typical of the period: a woman engaged in illicit pleasures of one kind or another had to suffer a downfall to balance out the licentiousness of her actions. This "moral lesson" redeemed lesbian pulps from the ranks of mere pornography under the pretense of providing a public service. In addition, these stories sent a not-so-subtle message to lesbians about their place in society. "Frank" (code for "sexually explicit") stories warned readers about: the predatory older lesbian; the dangers of a poor father-daughter relationship; the susceptibility of orphans; the perils of the big city; the "immaturity" of lesbian sex; and the general misery of a lesbian existence.

These novels give us the flavor of the times (1950-1968) with regard to sexual mores and public attitudes toward lesbian sexuality-which, judging from the popularity of the books, amounted to a love-hate relationship. Although the 1950's and early 1960's have been portrayed in the media as a desexualized time (i.e., "Happy Days"), that image betrayed by these books, which paint a Hugh Hefneresque, hedonistic lifestyle. They are also a lesson in unintended consequences: during a period when pulps in book and magazine form flourished in many genres (detective stories, science fiction, horror, westerns, and gay male pulps), what publisher could have expected that these books, initially written by and for men, would strike such a cord with women?

This bibliography of texts and sources was compiled by Maureen McClarnon, 2000.