Overview of the Collections

Duke's David M. Rubenstein Rare Book & Manuscript Library holds rare and unique materials for the study of many periods of British literature, with the following areas of strength from 1600-1950: 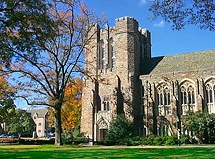