Beyond Nancy Drew: A Guide to Girls' Literature

Created by the Stratemeyer Syndicate in 1913 as a counterpart to their Speedwell Boys series, the Ruth Fielding series was unusual for the era, as it focused on a single heroine. Written by various authors under the pseudonym of Alice B. Emerson, the series contains 30 titles.

Ruth herself is depicted as an independent girl, brave but not without moments of vulnerability. The first half of the series deals with Ruth's years in school, while the second 15 books have plots relating to mysteries and adventures during Ruth's career as a moving picture director, actress, and finally owner of her own movie studio. During the 1st World War, Ruth served as a nurse in France. The Rubenstein Library has the following titles, published between 1913 and 1921 by Cupples & Leon. 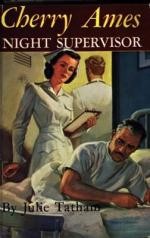 The Cherry Ames series is one of the most popular career-oriented series for girls, and has been published internationally. When Helen Wells decided to stop writing the Cherry Ames series, Julie Campbell Tatham took them over, then later returned them to Wells. Cherry began her nursing career as a student, training to be a war nurse. In addition to being a competent and compassionate nurse, Cherry Ames is a bit of a sleuth. The following titles were all published between 1944 and 1959 by Grosset & Dunlap in New York.