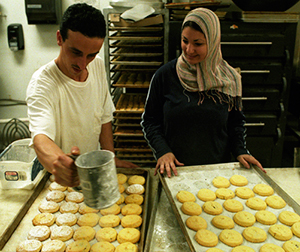 Pew Global Attitudes Project: Common Concerns About Islamic Extremism: Muslim-Western Tensions Persist (released 7/21/2011)
Muslim and Western publics continue to see relations between them as generally bad, with both sides holding negative stereotypes of the other. Many in the West see Muslims as fanatical and violent, while few say Muslims are tolerant or respectful of women. Meanwhile, Muslims in the Middle East and Asia generally see Westerners as selfish, immoral and greedy – as well as violent and fanatical.

U.S.-Muslim Engagement Project in affiliation with the Search for Common Ground (SFCG) organization released a report entitled: Changing Course: A New Direction for U.S. Relations with the Muslim World.
The report "represents the consensus of an exceptionally diverse, senior, bipartisan and inter-faith group of 34 American leaders who have worked together over the last 18 months. Their work was supported by Search for Common Ground and CBI, two organizations that specialize in building consensus on controversial public issues."

Outreach initiative of the Duke Islamic Studies Center (Duke University), in partnership with the Carolina Center for the Study of the Middle East and Muslim Civilizations (UNC Chapel Hill) and the Oxford Centre for Islamic Studies (Oxford University)