Reprints in the library

There are many primary sources in Perkins that are reprints.  They can be checked out.

From India, Raj and Empire

Eighteenth Century Collections Online ECCO
Nearly 150,000 English-language books and other publications, such as pamphlets,  published between 1701 and 1800 are included.  You can limit to documents with a map.

Electronic Enlightenment
Offers access to the web of correspondence between the greatest thinkers and writers of the long 18th century.  Includes a location gazetteer.

Empire online
Collection of full-text documents on the British Empire from the 15th century to the 20th century. You can click on Topics under the search box then choose "exploration" to get a selection of documents on that topic.

Making of the Modern World
Primary source documents online on economic and business activity in the West, from the last half of the 15th century to the mid-19th century. Go to advanced search and choose documents containing maps.

Sabin Americana
This collection contains works about the Americas published throughout the world from 1500 to the early 1900's.  Go to advanced search and choose documents containing maps.  You can also choose subject areas such as colonization or maritime.  You can select map under Illustrations.

Colonial State Papers
provides access to thousands of papers concerning English activities in the American, Canadian, and West Indian colonies between the sixteenth and eighteenth centuries.  This has nice maps but you have to use "map" as a keyword.

Virginia Company Archives
Documents the founding and economic development of Virginia as seen through the papers of the Virginia Company of London, 1606-1624. There are maps under "Further Resources."

Probably the best way is to go to the Special Collections Reading Room and ask the reference librarian!

Man of the Sandwich Islands 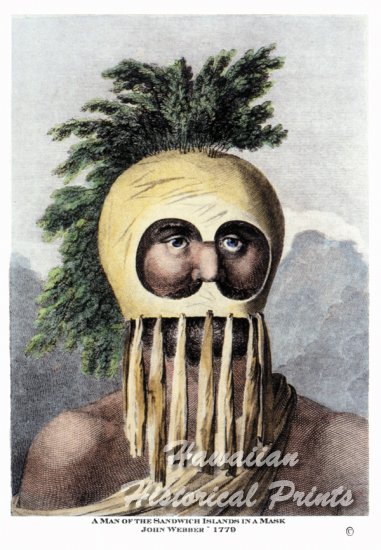 Man of the Sandwich Islands in a mask, 1779 “A mask made of a large gourd with holes cut in it for the eyes and nose. The top was full of small green twigs”, from Captain Cook’s logbook.