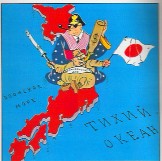 The resources highlighted here will be more accessible to those who cannot read Japanese. While you won't be able to read the text, you'll find these resources to be usable in your classes or personal study because their captions include western dates.

The last note in each description indicates the calendrical systems used in the resources.